Backs To The Wall: Game 6 Tonight 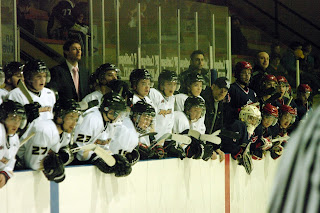 Game 6 between the Rebels and Braves goes tonight in Spokane (8:00 PM, Eagles Ice-A-Rena), with the Braves one win away from the second round. Last night was another chippy affair that saw Spokane come away with a 5-3 win in front of another exuberant crowd at the Complex. Dylan Tappe had a hat-trick for the winners with Jesse Collins and Joel Stewart chipping in singles. Darren Tarasoff, Keagan Little and Spencer Brodt replied for the Rebels, who outshot Spokane 43-26.

Spokane's special teams were one of the deciding factors last night. The Braves scored twice with the man advantage, and Tappe's breakaway short-handed goal at 13:43 of the first period gave the visitors a 3-1 lead and a huge psychological boost.

The teams each lost defencemen through the course of the game. Darren Tarasoff left late in the second period and did not return, while Braves d-man Cody Mesick didn't see the ice in the second half of the game. The Rebels are hard-pressed for 19 year-old Tarasoff's services after losing Erik Alden (who, by the way, did a terrific job running the camera for me last night) in Game 2. We'll also see if Braves forward Joel Stewart receives any supplementary discipline for a slashing major and game misconduct incurred at the final buzzer. Personally, I didn't see it, but the Rebels coaching staff were definitely hot and bothered coming off the ice at the end of the game. For those keeping score, Stewart now has 61 PIMs through the first five games of the series.

If the Rebels win tonight, they will force a Game 7 back at home in Castlegar Saturday night at 7:30 PM. Unfortunately I'll be providing commentary from afar as I'll be in Vancouver for the weekend.

Looking out of town, the Nelson Leafs couldn't seal the deal in their Game 5 last night. Beaver Valley snuck out of the NDCC with a 3-2 win heading into tonight's Game 6 in Fruitvale. Tyadg McGauley scored twice including the game-winner. Kimberley also managed to stay alive, winning 4-3 in Creston Valley. The Thunder Cats lead the series 3-2.

Tonight, of course the Rebels/Braves, Leafs/Nitehawks and Dynamiters/Thunder Cats series will continue, but Round 2 will start in the Okanagan Conference. The first-place Revelstoke Grizzlies host Chase in their series opener. Princeton and Sicamous get going tonight as well. Looking to the BCHL, the Trail Smoke Eaters will start their playoff campaign in Westside tonight. My Mountain FM colleague Shawn Mullin will be in West Kelowna with the play-by-play as always, for more info visit his blog.
Posted by Chris Wahl at 9:14 AM