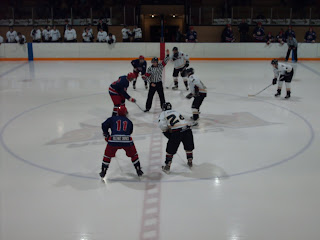 Too little, too late for the Castlegar Rebels tonight against a Spokane team that they will now definitely meet in the first round of the playoffs. The Braves jumped out to a 1-0 at the 10:10 mark of the first period, as Uriah Machuga snapped home a quick wrist shot right off a face-off in the Rebels zone for his 16th of the season.

It stayed that way until the 8:19 mark of the third period, when Jake Peterson crashed the net and took the puck with him, batting a rebound out of mid-air into a yawning cage. The Rebels would get one late, as Ryan Aynsley went coast-to-coast (like buttered toast as one historic NHL broadcaster would have said in the past) finally getting a puck past Braves goalie Cash Ulrich at 17:18 of the third for his 36th goal of the season.

The Rebels were outshot 36-22 tonight, but the Braves were 0-for-7 with the man advantage in a game that seemed to get chippier as it progressed. It should make for an interesting playoff series for sure as it was apparent to everyone in attendance tonight that these two teams do not like each other at all.

Andrew Walton was one other bright spot for Castlegar tonight. He made several saves, especially in the second period, to keep the Rebels within striking distance. It's no coincidence he was named the Rebels player of the game tonight.

The Rebels were without Stuart Walton and Curtis Pereverzoff tonight. Forward Dylan Richardson also missed the game as he played for the BCHL's Prince George Spruce Kings last night and tonight.

Tonight's game summary is available from the KIJHL website here.

Rebels next action is tomorrow afternoon when they visit the Beaver Valley Nitehawks. Puck drop is at 1:00 PM in Fruitvale. If you can't make it to the game, come say hi at Mountain FM's Super Bowl party, taking place at Element in Castlegar.


Postgame Audio:
I had a chance to catch up with Braves head coach Mike Bay after the game tonight. You can hear that interview here.

I also spoke briefly with Castlegar assistant coach Topher Plonka and that audio is available here.


One other game involving a Neil Murdoch division team tonight. Gavin Currie notched his second game-winning goal in as many nights as the Nelson Leafs beat Penticton 4-3 in overtime.

Looking to other action tonight, Sicamous beat Revelstoke for the second time in two days, this time 5-4. Former Rebel Ben Bula had a goal and an assist in a losing effort. Princeton snuck past Chase 5-4 in overtime. Fernie beat Golden 5-2, and Brennan Romanovitch, late of the Border Bruins, had a hat trick leading Kimberley over Creston Valley 7-4.

Finally, news on another former Rebel. Ryan Renz and the Alberni Valley Bulldogs got past the Trail Smoke Eaters 5-4 in overtime tonight at Cominco Arena. Renz was held off the scoresheet.

Back tomorrow to set up the Rebels/Nitehawks tilt in Fruitvale!
Posted by Chris Wahl at 10:41 PM