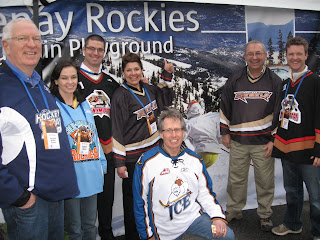 That's Castlegar Mayor Lawrence Chernoff (second from right) and volunteer Audrey Repin (middle, wearing Rebels jersey) at the Kootenay Rockies Booth in Richmond. They're part of a group of volunteers promoting our area at the Vancouver 2010 Winter Games. Neat to see the Rebels jersey getting some publicity in the big city, for sure!

Back to matters at hand though, a big matchup tonight as the Rebels (28-16-2-2) and the Creston Valley Thunder Cats (28-17-0-4) hook up at the Castlegar Complex (7:30 PM). The Rebels didn't get any favours yesterday from their neighbours in Grand Forks, as the Border Bruins dropped a 3-1 decision to Spokane (a Spokane loss would have clinched home-ice advantage in the first round for Castlegar). Instead, the Rebels need to do it themselves tonight against a team playing their third game in as many nights. Castlegar has lost a season-high 4 straight games coming into tonight's contest, while the Thunder Cats are fresh off a home-and-home sweep against Beaver Valley Thursday and Friday.

This is the third and final meeting of the season between these two teams, here's a look at how the teams fared in the first two matchups.

No player on either team has more than 2 points in the season series thus far. Tyler Robinson has a goal in each game, while the Thunder Cats' leading scorer Travis Ludwar has a goal and an assist. Only three players on both rosters have scored 20 or more goals this year as well: Ludwar (28), and the Rebels' Ryan Aynsley (36) and Spencer Brodt (25). Ryan Reid has only scored 3 times this season, but one of his goals was the overtime winner on December 4th. Watch for Creston's Colton Grolla on the back end as well, he was named the KIJHL's top defenceman in 2008/09.

No webcast tonight, so the only way you can see this one is to get down to the rink!

Only one other matchup tonight involving Neil Murdoch teams. Nelson (35-10-2-2) hosts Grand Forks (6-41-1-1). It's a special night as well in Nelson, as the game will double as a fundraiser to help rebuild the Haiti Arise Christian Mission. That's where 17 local high-school students from Mount Sentinel Secondary were stranded when the devastating earthquake struck Haiti last month. I'm told a silent auction and a bake sale will be part of the night's events.

Congrats to the Penticton Lakers. In their first year since moving from Summerland, they clinched the final playoff spot in the Okanagan Conference last night. They'll face either Princeton or Sicamous in the first round.

Finally, kudos to the fans at Trail's Cominco Arena last night. It was a nice touch for arena staff to put last night's opening ceremonies from Vancouver on the big screen before the Smoke Eaters/Warriors game, (which, if you're keeping score, Trail won 4-2), and during the intermissions. But it was also neat to hear fans clapping and cheering for former Rossland resident Nancy Greene as she stood with her torch on the BC Place floor during the lighting of the cauldron.
Posted by Chris Wahl at 9:54 AM