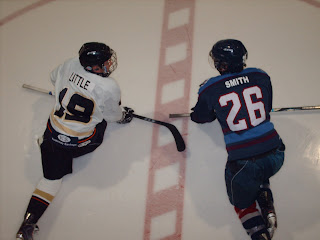 An enormous win tonight for the Castlegar Rebels. The 7-0 triumph ensures the Rebs will have home-ice advantage for their first-round series against the Spokane Braves, and the team fired on all cylinders against a Creston Valley team that didn't generate much offense all night. Granted, the Thunder Cats were missing leading scorer Travis Ludwar, top defenceman Colton Grolla and starting netminder Sunny Gill, but it's a result the Rebels needed, and got.

Castlegar opened the scoring on a nifty backhand by Spencer Brodt at 15:13 of the first period. He cut around a Thunder Cat defenseman before tucking it under Creston goalie Chad Katunar's pad. Keagan Little smacked home a one-timer from the slot just over 4 minutes later as the Rebels took a 2-0 lead into the first intermission.

The scoring continued in the second. Ryan Aynsley put home a wrist shot after intercepting a pass in the neutral zone 1:50 into the second for his team-leading 37th of the season. Patrick Christie added another before the second period was out, but not before Taylor Anderson and Creston's Joel James were both thrown out of the game for fighting, as a skirmish erupted after Aynsley was checked into the boards awkwardly.

Andrew Shaw, Travis Flaherty and Tyler Robinson added singles in the third. Andrew Walton made 25 saves between the Rebel pipes for his 6th shutout of the season.

The Rebels wrap up the 2009-10 regular season in Spokane tomorrow afternoon in a game that will now serve as a playoff preview instead of a battle for home ice. Creston Valley, on the other hand, will open the playoffs at John Bucyk Arena against either Golden or Kimberley, who wrap up a home-and-home against each other tomorrow in the Bavarian City (the Rockets beat the Dynamiters 4-2 tonight by the way). Creston Valley definitely looked like a team that was playing their third game in as many nights and were missing three key players. We can only assume head coach Joe Martin kept Ludwar, Grolla and Gill out for rest.

I talked with Keagan Little after the game, that interview is available here. I also had a nice chat with backup goaltender Alex Ross's mother tonight. She says the team is really loose as evidenced by their recent team photos, which I'm sure will be available soon. (She actually got a great shot tonight of Aynsley being checked from behind, leading to the big mix-up in the second, hopefully that picture pops up somewhere soon, maybe here!).

A busy night in the KIJHL tonight. Nelson doubled Grand Forks 4-2 in the only other Neil Murdoch Division action. As I mentioned earlier, Golden beat Kimberley by the same 4-2 score. If the Rockets manage to pick up another win over the Nitros tomorrow, they'll avoid Fernie in the first round, which I'm sure would be incentive enough for anyone. In other scores, Sicamous shut out Penticton 4-0 in a first-round preview, Kamloops hammered Revelstoke 5-1, and Princeton over Chase 5-2.

Brief BCHL note, the Trail Smoke Eaters swept their two-game mini homestand with the Westside Warriors by beating them 4-1 tonight at Cominco Arena. We had Sean Nugent on Mountain FM this morning, he commented on how the dressing room has a much different atmosphere now that the team is winning and everyone is getting healthy again. Great to see!
Posted by Chris Wahl at 11:49 PM