As promised, some audio reaction to yesterday's Steve Junker hiring.

Former Rebel and current assistant Darcy Martini.
Posted by Chris Wahl at 9:20 AM No comments: 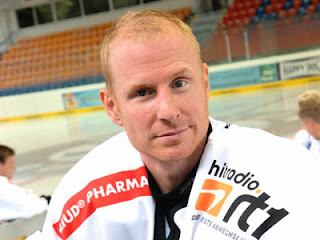 The Rebels have gone local: they've hired former Castlegar minor hockey product Steve Junker to be their new head coach and general manager. Junker is fresh off an 18-year pro hockey career that included a stint with the New York Islanders. He's spent the last 13 seasons playing in Germany, most recently with the Augsburg Panthers, and also was a part of the Spokane Chiefs' 1991 Memorial Cup-winning team.

I interviewed Rebels president Jim Craig this morning about the decision, and one of the things he considered very important was Junker's connection to the community. In a statement Junker says "I want to return home with my family and yet stay involved in hockey in my home town," and having once played for the Rebels he obviously understands what the team means to the people here. I'll have the full interview available in the next few days.

To me, the parallels to the Nelson Leafs really stand out. 5 years ago, Nelson hired Simon Wheeldon, a local product who spent many years in the professional game in both North America and Europe, and his knowledge, hockey contacts, and commitment to the community were instrumental in the Leafs' success. He helped build a model of success in Nelson and this move to hire Steve Junker seems similar in that he wants to be part of the Rebels organization long-term. Craig also told me the players were very interested to see who would be brought on board as coach, and that most would like to return to Castlegar unless opportunities at higher levels of hockey present themselves.

A couple other tidbits.. the Nelson Leafs should have their head coach in place in the next two to three weeks. This of course after Simon Wheeldon stepped aside on April 15th. A member of the board told Mountain FM they have a couple of names in mind.

Revelstoke defenceman Brad Irving has received a scholarship to SFU. Good luck to him and hope he enjoys life on Burnaby Mountain.

The Chase Chiefs saga continues. As we await for Kelowna Rockets GM Bruce Hamilton to hand down his verdict on whether the team can play in Rutland, word has come out now that the other local group looking to land an expansion team in Chase won't be able to do so until the 2011-12 season, as they've apparently missed the application deadline.

I was in Vancouver for Game 6 of the Western Conference final between the Giants and Tri-City Americans on Sunday afternoon. Tri-City won 5-2 to advance to the league finals against the Calgary Hitmen. Easily the most noticeable Giant out there was Trail product and former Nitehawk Craig Cunningham. He hit a post early in the game, scored a goal in the second, and had a ton of hustle despite the rest of his team looking really tired and lacking urgency. Cunningham has come a long way since I watched him in his rookie WHL season in 2006-07, good luck to him and Nelson's Isaac MacLeod (of the Penticton Vees) who are both ranked among North American skaters for the upcoming NHL Entry Draft.
Posted by Chris Wahl at 2:00 PM No comments:

Former Castlegar Rebel Luke Richardson had a hat-trick in yesterday's final as the Revelstoke Grizzlies beat the Saskatchewan champion Tri-Town Thunder 5-3 to win the Keystone Cup in Kamloops. Another former Rebel, Ben Bula, chipped in an empty-netter as well as the KIJHL took 2 of the top 3 positions in the tournament with the Kamloops Storm finishing third. Congrats to the Grizzlies on a terrific season!

The expansion Osoyoos Coyotes are starting to put together a roster. After acquiring a trio of players last week that included former Princeton and Kimberley forward Thierry Martine, the team snagged Stefan Jensen from Golden over the weekend as well. Martine had 50 points with the Posse and Dynamiters in 2009/10 while Jensen notched 20 goals for the Rockets last season. Jensen is also a former Grand Forks Border Bruin.
Posted by Chris Wahl at 9:59 AM No comments:

As per Shawn Mullin's blog, Simon Wheeldon has stepped down as head coach and GM of the Nelson Leafs after 5 seasons.
Posted by Chris Wahl at 4:58 PM No comments:

The Penticton Lakers have hired Evan Marble as their new head coach and GM. He's a former assistant with the BCHL's Westside Warriors and also coached with the Pursuit of Excellence program. He takes over from Alan Kerr, who was bench boss for the Lakers' first season in Penticton since moving from Summerland. Read more here.

The Fernie Ghostriders got a lot tougher. They snagged tough guy Zach Baba from Golden in a trade yesterday. He'll be entering his fourth season in the KIJHL next year having already tallied 1040 PIMs in 3 seasons with the Rockets.

Revelstoke is off to a 2-0 start at the Keystone Cup. They beat the host Kamloops Storm 6-2 and then doubled Saskatchewan's Tri-Town Thunder 4-2 in round-robin play yesterday. The Storm also dispatched the Selkirk (MB) Fishermen 7-1. The Grizzlies play the Fishermen this afternoon while Kamloops draws the Northern Hawks (from Thunder Bay) and the Beaumont (AB) Chiefs in their two games.
Posted by Chris Wahl at 8:16 AM No comments:

As I write this, the two KIJHL teams taking part are underway in the Keystone Cup opener. Both the Revelstoke Grizzlies and host Kamloops Storm will play 5 games in the next 3 days.

Stay tuned to all the action here.
Posted by Chris Wahl at 9:53 AM No comments:

As posted on Gregg Drinnan's blog, the KIJHL voted yesterday to allow the Chase Chiefs to move to Kelowna for the 2010-11 season. The vote was carried 10-3, with 3 teams abstaining and 1 absent. The Chiefs are proposing to play in the Rutland Arena, but the move is still contingent on Kelowna Rockets president Bruce Hamilton's so-called veto power. Part of his agreement with Prospera Place is that he has final say on any hockey teams wanting to move into the Kelowna market, though you'd have to figure the Rockets wouldn't be threatened at the gate by a Junior B team.

I spoke with one KIJHL exec a couple of weeks ago during the league finals who was dead-set against the move. The thought-process there is, any potential team in Kelowna could pick off any local products looking to play at the Junior B level, which could hurt some of the smaller market franchises. For example, the Rebels had 5 Kelowna players on their 2009-10 roster including leading scorer Ryan Aynsley.

The Rebels are also in the process of reviewing their applicants for the vacant head coaching position. I've been told they have received over 20 applications from as far away as Atlantic Canada and Texas, and they would like somebody in place sooner rather than later. I imagine we'll hear a lot more about the decision in the next two weeks.
Posted by Chris Wahl at 11:50 AM No comments:

After picking up only one point out of their first two games, the Revelstoke Grizzlies won when it mattered most, beating the Oceanside Generals 5-1 on Saturday and then the VIJHL champion Peninsula Panthers 4-1 in yesterday's final to win the Cyclone Taylor Cup and book their ticket to the Keystone Cup (Western Canadian championship) being held this year in Kamloops. They'll meet their friends from the KIJHL's Okanagan Conference, the Kamloops Storm, as well as the Capital Junior Hockey League's Beaumont Chiefs (Alberta) and the Northern Hawks from Thunder Bay. Teams from Manitoba and Saskatchewan are still yet to qualify. The tournament gets underway beginning April 15th, get all the information here.
Posted by Chris Wahl at 8:35 AM No comments:

A couple of moves to report on by the Fernie Ghostriders.

They traded forwards Darrell Boldon and Matt MacDonald to the Columbia Valley Rockies to finish an earlier deal. MacDonald is headed to Invermere as the future considerations that moved Boldon from the Rockies to the 'Riders in December while Boldon's rights have been sent back to the Rockies as well. Boldon had 6 points (4-2) in the playoffs while MacDonald chipped in with a goal and an assist. The two Calgary natives will be overagers next season.

Fernie wasn't done there. They shipped Zach Fridella to the VIJHL's Kerry Park Islanders for 1991-born forward Cole Peterson. Peterson finished 4th in the Vancouver Island circuit in scoring in 2009-10 notching 65 points (26-39) in just 40 games. Peterson should bring some offence to a Ghostrider club looking to bulk up for the 2011 Cyclone Taylor Cup.

Speaking of the provincial championships, the 2010 Cyclone Taylor Cup is just getting underway in Parksville at the time I'm writing this, with the Revelstoke Grizzlies taking on the VIJHL champion Peninsula Panthers. Midway's Brent Lucente, a former Rebel and Border Bruin, finished fifth in Panthers scoring this season with 43 points. The host Oceanside Generals and the PIJHL champion Aldergrove Kodiaks are the two other teams taking part, with the winner moving on to the Keystone Cup, being hosted this year by the Kamloops Storm.
Posted by Chris Wahl at 3:28 PM No comments: