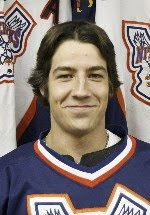 Mountain FM has confirmed the Beaver Valley Nitehawks have shipped forward Scott Morisseau to the Fernie Ghostriders for future considerations. Morisseau led the KIJHL in scoring in 2009-10 notching 33 goals and 84 points. He has 130 career KIJHL points in 3 seasons as a Nitehawk, and has APed at the Junior A level with the Merritt Centennials.

Stay tuned to Mountain FM tomorrow (Wednesday) for much more on this deal.

WEDNESDAY AM UPDATE: I just got off the phone with Ghostriders head coach Will Verner. He's obviously excited to add a player of Morisseau's caliber as they work toward hosting the 2011 Cyclone Taylor Cup. I'll post the full interview later as well as a chat I had with Nitehawk coach Terry Jones about the deal.
Posted by Chris Wahl at 10:44 PM No comments:

Kelowna native Erik Wentzel is back in Castlegar after spending last season with the SJHL's Estevan Bruins. Wentzel spent two full seasons with the Rebels in 2007-08 and 2008-09, talling 44 points but also adding 357 penalty minutes. He told me he's ready to accept more of a leadership role being an overage player this season, and that means not only providing a physical presence but also "maybe putting a few more pucks in the net too."

To hear the full interview with Wentzel, click here.

Bits & Bites: a couple of trades in the KIJHL were announced yesterday, though one has been pulled off the league website. That would be Revelstoke's acquisition of overager Brooks Christensen from the Princeton Posse. Christensen was second on the Posse in scoring last season with 57 points. Creston Valley also dealt forward Brody Moen to Kamloops. Moen had 14 points and 80 PIMs with the Thunder Cats last season. The Rebels are still searching for a volunteer to operate the cameras for this season's pay-per-view webcasts. Interested parties should drop a line to the team at castlegarrebels@hotmail.com.
Posted by Chris Wahl at 8:59 AM No comments: 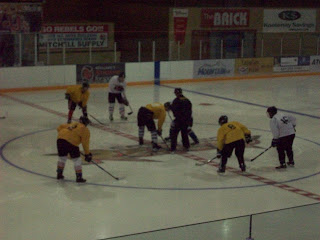 Rebels veterans and hopefuls wrap up their 2010/2011 training camp today with a series of scrimmages and an All-Star Game (3:00, Complex) as we inch closer toward the start of the season.

I took in yesterday's scrimmages along with a decent-sized group of parents and fans alike and was impressed by both the speed and toughness of some of the younger players in the lineup. One name that was being murmured throughout the afternoon was that of Diego Bartlett, who is trying to crack the lineup as a 16 year-old. Bartlett and major midget teammate Arthur Andrews played well together on a Team Yellow squad that also featured last year's captain Gilbert Bilodeau, who played out his eligibility last season, and former Williams Lake Timberwolf Anthony DeLong (pictured at centre). Word is DeLong could be back if a Junior A camp in the SJHL doesn't go as expected.

One familiar face who will be back as an overager is forward Erik Wentzel. He spent last season with the SJHL's Estevan Bruins (1-3-4, 106 PIM in 46 GP), but spent the two previous seasons in Castlegar. He spent much of the day yesterday hitting absolutely everything in sight. Wentzel, fellow Kelowna product Ryan Aynsley, and local Darren Tarasoff were the only 20 year-olds I counted, as I'm told Andrew Shaw decided over the summer not to return for his 20 year-old season.

Local fans can get their first taste of Rebels hockey this Saturday at the Complex when they host Grand Forks in exhibition play. I'm told that game (and the away tilt Friday night in the Boundary) will be another chance for some of the young guys to strut their stuff.

Bits & Bites: Rebels goaltender Andrew Walton played half the game Friday night in Trail's 4-0 BCHL exhibition loss against the Vernon Vipers. Two trades between KIJHL and other Junior B teams to report: North Okanagan sent Bryon Maxwell (9-9-18 in 22 GP in 2009/10) to the PIJHL's Mission Icebreakers for futures, while the VIJHL's Saanich Braves snagged former Sicamous defenseman Hayden Long in a futures deal. Grand Forks held their camp over the weekend, Beaver Valley's kicks off today while Nelson Leaf hopefuls have to wait until Wednesday to show their talents.
Posted by Chris Wahl at 9:41 AM 1 comment:

The RDCK Board of Directors is expected to vote tonight in favour of November 6th as the date which Castlegar, Area I and Area J voters will decide whether to go ahead with a $25-million dollar expansion of the Complex. I had a chance to talk with city councillor Kirk Duff yesterday to shed some light on exactly what's going to happen. You can hear the full interview here.

The expansion will have some impact on the Rebels, to be sure, though I'm told the existing sheet of ice will remain as the home rink for the team. The second sheet will still be regulation-size, but won't have nearly as large a seating area as the existing facility (informally I heard capacity of 200 compared to nearly 1,000 for the current rink).

The city has put a diagram of the proposed changes on their website. We'll surely get a better idea of just what's in store during the three open houses in October.

Bits & Bites: the league put out a release yesterday hoping to attract more officials. Interesting to note the quote by Bill Ohlhausen saying he'd like former players to consider donning the stripes. Our friends at RiderNews have the latest on a possible new misconduct rule. A rumour floating around has Revelstoke possibly making the jump to Junior A in 2011-12 to coincide with renovations to the Forum. As alluded to earlier, former Nitehawk Layne Stopanski has signed a try-out agreement with Nybro of the Swedish First Division (the third tier of hockey in Sweden).
Posted by Chris Wahl at 11:09 AM No comments:

The Rebels open their 2010 training camp at the Complex this Friday, August 27th. Here's a run-down of the entire weekend.

I'll have photos and recap of this weekend's action sometime early next week. Your first chance to see the 2010-11 Rebels in action at the Complex will be their only home exhibition date, next Saturday, September 4th against Grand Forks.

Bits & Bites: former Rebels coach Brent Heaven will be joining Simon Wheeldon as co-coaches of the major midget Kootenay Ice. Kelowna has snapped up former Rebel and Revelstoke Grizzlies forward Luke Richardson as well as former Leafs Dane Rupert and Landon Andrusiak. Andrusiak's father Ken is the team's coach. Rebels goaltender Andrew Walton is at camp with the Trail Smoke Eaters, while forward Spencer Brodt and defenceman Tyler Jones are trying out for the Merritt Centennials. Castlegar native and former Edmonton Oil King Tyler Hlookoff is at camp with the Penticton Vees as well. Stay tuned to Mountain FM tomorrow (Wed) for some interesting news on a former Beaver Valley Nitehawk captain. One other small transaction to report, Creston Valley sent Matt Dixon (4-4-8 in 46 games in 09/10) to the VIJHL's Oceanside Generals for future considerations.
Posted by Chris Wahl at 5:46 PM No comments:

The new Castlegar Rebels website is up and running in advance of the upcoming season. As the year progresses, be sure to check back as several ideas have been bandied about in terms of interactive content, which is something I'm personally looking forward to helping out with.

The team also announced forward Taylor Anderson will be back this season, joining fellow local Darren Tarasoff in committing to the 2010-11 Rebels. Anderson was unarguably the team's most energetic penalty-killer last season, ironic considering he also lead the team in penalty minutes with 283.

Bits & Bites: the team's 3-game exhibition schedule has been released. They'll open up a home-and-home set in Grand Forks Friday, September 3rd before returning home to host the Border Bruins the next night. The Rebels will also get an early look at the Beaver Valley Nitehawks in Fruitvale on September 5. The regular season opener is September 10, at home against Nelson.
Posted by Chris Wahl at 11:10 AM No comments:

Halderman to Rockies in 3-player swap

Grand Forks has traded last season's KIJHL penalty-minute leader, defenseman Jacob Halderman, to the Columbia Valley Rockies in a 3-player deal. In return, the Border Bruins receive defensemen Zack MacLellan and Jordan Groenheyde. Halderman racked up 378 PIMs with Grand Forks last year, adding 15 points (3-12) offensively. MacLellan represented the Rockies at the 2010 KIJHL All-Star Game in Fruitvale, the Coquitlam native has 18 points (6-12) in 2 KIJHL seasons, both with Columbia Valley. Groenheyde is entering his second season in the league, he notched 6 points (1-5) as a 16 year-old last season in Invermere.
Posted by Chris Wahl at 1:11 PM No comments: