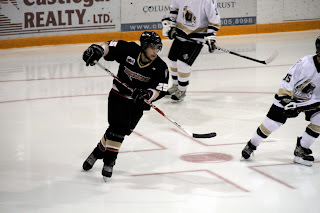 The pre-season schedule finishes up for one team, and just begins for another as the Rebels and Nelson Leafs face each other tonight (7:00, NDCC Arena). Castlegar has pared their roster down a bit further after the weekend's games, I'm told they dressed a bunch of prospects again in Sunday's 3-1 win in Beaver Valley. I'm told there are tough choices to be made at every position ahead of Friday's season-opener.

We haven't heard much about who has attended Nelson's camp, though. Aside from veteran returnees like last year's captain, Taylor O'Neil and scoring sensation Gavin Currie, I'm interested to see who's going to round out their roster. Both goalies from last year have been having solid Junior A camps as well, Billy Faust in Penticton and Matt Larose in Trail.

As promised, some audio from the weekend:

Arthur Andrews (pictured above, thanks to Kim Magi from the Castlegar News for the pic!)

On Tap: 3 other games on the KIJHL exhibition sked, including Grand Forks and Beaver Valley locking horns in Fruitvale. More on the Border Bruins' goaltending situation below.

Bits & Bites: Grand Forks has traded the CHA rights of goaltender Ryan Garber to Creston Valley. An interesting deal to say the least, because Garber is one of two goalies remaining at the Merritt Centennials' camp. Whether or not he sticks is another question, as 2009/10 Centennial netminders Keith Hamilton and Cole Holowenko are vying for WHL gigs in Portland and Chilliwack respectively.
Posted by Chris Wahl at 11:16 AM