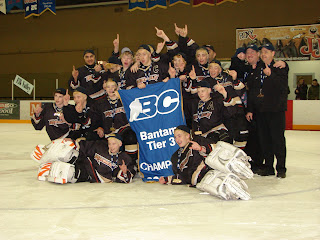 Next Tuesday's home game against the Grand Forks Border Bruins will see two local teams honoured at the Castlegar Complex. Last year's pee-wee and bantam rep teams both won provincial championships (the bantams on home ice to boot), and their banners will be added to the rafters on the far side of the ice. Listen to Mountain FM's Overtime tomorrow as I hope to track down Rebels assistant coach Bruno Tassone for his thoughts, he of course was the bench boss of the bantam reps last year.

Machuga to Trail: Former Spokane Brave Uriah Machuga made his Trail Smoke Eaters debut last night in Surrey. Mountain FM's Jon Zacks caught up with the 18 year-old Californian prior to puck drop, hear what he had to say here.

PG Snags Former Leaf: I chatted with Prince George Spruce Kings head coach Ed Dempsey yesterday after they acquired 18 year-old defenseman Bennett Hambrook from the Vernon Vipers. Hambrook, of course, spent last season with the Nelson Leafs, where he led the team in PIMs with 242. Check that audio out here.

Out of Town: One game on the Thursday KIJHL sked: Spokane faces Grand Forks for the second time this season, this time in the Boundary. The Braves beat the Bruins 5-2 in Spokane on September 12th.

Bits & Bites: A bunch of trades to catch up on: Osoyoos sent a pair of 18-year olds, Jacob Bergeron and Kashtin Gordon to the PIJHL's Squamish Wolfpack. The Coyotes also picked up 18 year-old Brandon Watson from Grand Forks. Creston Valley sent goaltender Lukas Simpson back to the coast. After acquiring him from the VIJHL's Peninsula Panthers over the summer break, they sent him to the PIJHL's Mission Icebreakers. North Okanagan also parted ways with a vet, they sent 19 year-old Kurtis McTaggart to the PIJHL's Aldergrove Kodiaks. Nelson will be without defenseman Raymond Reimer when they visit the Border Bruins tomorrow. He picked up a one-game suspension for receiving a misconduct in the final 10 minutes of Sunday's win over Penticton, who ironically enough, is his former team.
Posted by Chris Wahl at 10:10 AM