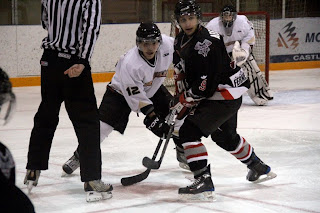 The Rebels head to arguably the toughest rink in the KIJHL to win in tonight when they visit the Fernie Ghostriders (6:30 Pacific, Fernie Memorial Arena). It's the second meeting in 6 days between the two clubs, with the Rebels having squeaked out a 4-3 overtime win last Saturday night in dramatic fashion.

Castlegar will have a friendly face back in the lineup tonight. Spencer Brodt returns after serving a four-game suspension. No word yet, though, on who will take his place in the press box tonight.

Our Opponent: Despite the loss to the Rebels Saturday, Fernie remains top dog in the Kootenay Conference. They whipped Columbia Valley 5-1 on Tuesday night in Invermere, and are undefeated at home so far this season. Thomas Abenante and Scott Morisseau, two vets with West Kootenay lineage, are the offensive leaders for the 'Riders, but I was impressed with the play of Californian Alex Milhouse last weekend as well. The team received word yesterday they will not get Brendan and Bond Hawryluk back for the rest of the season as they've been signed by Powell River of the BCHL. The Kings play-by-play man has more here.

Broadcast Info: Fernie's crew will have the pay-per-view, beginning at 6:30 Pacific time.

Out of Town:
Nelson is the only Neil Murdoch division team to have the night off tonight. Beaver Valley makes a rare visit to Kimberley, while Spokane is in Grand Forks.

Drive One For The Rebels: AM Ford and the Rebels are teaming up tomorrow for a fundraiser at The Brick in Castlegar. For everyone who test-drives a Ford vehicle there tomorrow, Ford Canada will donate a sum of money to the team, with a maximum total donation of $6,000. It's a great opportunity for the team to make some cash, and previous fundraisers for the Smoke Eaters and Beaver Valley Nitehawks have both been successful. If you're in the Castlegar area tomorrow, be sure to get out there. Mountain FM will be on location all day as well, I'm hoping to make it down for an hour or two in the afternoon once my news duties are complete.

Bits & Bites: Grand Forks has picked up two 18-year olds, snagging defensemen Cody Larsen and Derek Grimm from Revelstoke for futures. Larsen, however, is listed as out indefinitely with mono.
Posted by Chris Wahl at 9:01 AM