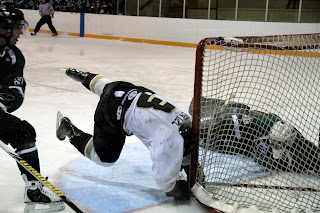 Some interviews for your listening pleasure from this past weekend.

For Rebels head coach Steve Junker after the 5-1 win over Nelson, click here.

Bits & Bites: I mentioned over the weekend the number of players that have moved on from last year's Nelson Leafs squad. A reader pointed me to forward Michael Spring, who is playing with Quesnel in the BCHL (by my count, that makes 12). A thirteenth, forward Chris Cucullu, is at Iowa State University, where he skates alongside another former Leaf, Mike Lebler, as well as former Fernie Ghostrider James Werner and ex-Columbia Valley Rockie Scott Ismond. Selkirk College dropped a pair of games at home over the weekend against Okanagan College. Former Rebel Tony Johnston made 35 saves in goal in a 6-1 Crusader win Sunday. His club also won the weekend opener by a 5-2 score Saturday night. Other former KIJHL players on Okanagan College's roster include Brock Munro (Nelson), Aaron Buat (Sicamous), and Craig Materi (Grand Forks). Selkirk plays at the University of the Fraser Valley and SFU this weekend, former Rebel Andrew Shaw is a part of this year's Fraser Valley Cascades squad.
Posted by Chris Wahl at 11:44 AM