Aynsley to Trail (this time for good) 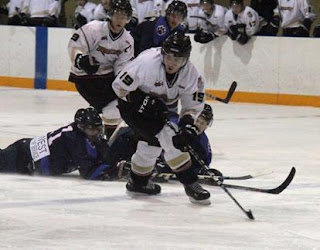 Ryan Aynsley will spend the rest of the 2010-11 season with the Trail Smoke Eaters, and to that I say good on him! After Saturday's 5-0 win in Nelson, the 20 year-old from Kelowna had 53 points in just 23 games played this year, as well as 9 in 4 games in Trail as an AP. Aynsley previously played in the BCHL with Merritt (that being in 2008-09). I wish nothing but the best for Aynsley as he finishes his junior career with another great franchise, and will make certain to head down Highway 22 to catch him in action with his new club.

Without question, his departure leaves a gaping hole in the Rebels offense, but one I believe the rest of the leaders on this club can patch up efficiently. Speaking with head coach Steve Junker after Saturday's win, I get the sense he'll be relying on his guys to play a more team-oriented game, rather than relying on #19 to score a point on every shift. Players like Anthony DeLong, Erik Wentzel, Spencer Brodt and Taylor Anderson will now be counted on as THE guys to provide the bulk of the scoring, whereas prior to Aynsley's departure they served as an offensively gifted supporting cast.

Bruce Fuhr of the Nelson Daily has a nice piece on Aynsley here as well.

We'll all get our first look at the post-Aynsley Rebels Friday night against the Spokane Braves (Complex, 7:30 PM). But, with the December 1st roster deadline now just two days away, who knows if the lineup we see today will be the one we see tomorrow.

Bits & Bites: At least one local team has gotten an early start on deadline day. Nelson picked up Minnesotan Rudi Schiebel from the North Okanagan Knights in a deal that sees 17 year-old Tanner Burns head to Armstrong. Schiebel was goal-less in 9 games as a Knight this year, but had 11 last year with the Penticton Lakers.
Posted by Chris Wahl at 8:41 PM