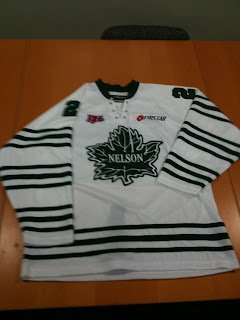 Tonight, the Rebels have a chance to play spoiler, and also get back to their winning ways. It's the 75th anniversary of Nelson's Civic Centre, so tonight, the Rebels and Leafs will do battle in the old haunt of the senior Maple Leafs clubs that competed in senior hockey for decades. (The current incarnation of the Leafs moved out in 2005 when the new NDCC Arena was built). There's no better opportunity for Castlegar to bounce back after a tough outing last night in Osoyoos, and to top things off, it's expected to be a sell-out crowd.

The jersey in the photo, by the way, is a one-off throwback being worn by the Leafs tonight (taken from our Nelson station 103.5 The Bridge's Facebook page). The Leafs will be auctioning the shirts off after the game.

The Rebels (18-5-0-0) will have a familiar face back in the lineup tonight. Erik Alden has served his suspension and will bolster a defence corps that relied on 5 bodies for the past three games (though AP Riley Ostoforoff made the trip to the South Okanagan last night). The team is also reportedly trying to swing a deal for a defenceman to add to the current staff, we'll have to wait and see if anything is done by the December 1st cut-down date.

Last Meeting: The two teams last played on October 15th in Castlegar, a game won by the Rebels 5-1. Erik Wentzel had a hat-trick in a game that saw suspensions doled out thanks to some third period fights. The Rebels lead the season series 3-0, and are 1-0 in Nelson this year (a 5-1 win on opening weekend).

Our Opponent: Nelson (15-11-0-0) comes into tonight's game on a 5-game winning streak, and after a slow start seem to have found their way in the Neil Murdoch division. A 3-2 win last night over Spokane, capped off by an OT winner by former Brave Joel Stewart, put the Leafs to within one point of the Washingtonians (with four games in hand). Gavin Currie has a wide edge in the team scoring lead with 35 points, the next closest Leaf is Colton Schell with 21.

In the Press Box: The Rebels were without Adam Smith last night as he remains with the BCHL's Cowichan Valley Capitals. Nelson will likely be without defensemen Cameron Dobransky and Walker Sidoni (both with upper body injuries), while defenceman Raymond Reimer is done for the balance of the season after having surgery earlier this year.

Broadcast Info: My colleague Matt Soper will have the call beginning at 7:00 on the pay-per-view. I won't be at the game due to a work commitment (I will be down the street from the rink in Nelson, however), but will update the Rebels Twitter at every opportunity (in layman's terms, whenever Soper texts me an update).

Out of Town: Two other Neil Murdoch teams are in action, both on the road. Beaver Valley is at Golden, while Grand Forks pays the defending champion Revelstoke Grizzlies a visit.

Bits & Bites: North Okanagan had a pair of new faces in the lineup last night. Thomas Swales joins the Knights from Osoyoos while Sean Leslie began the year in Sicamous. Leslie's club from last season, Columbia Valley, acquired Michael Keyes from North Okanagan earlier in the week. He made his Rockies debut last night. Yet another former Knight, Damon Brown, joined Kimberley this week along with ex-Leaf Tim Card.
Posted by Chris Wahl at 8:41 AM