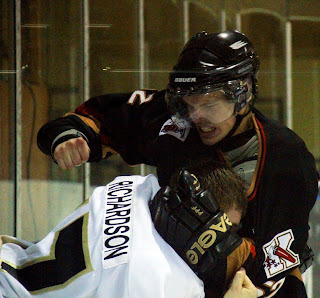 Taylor Anderson scored with 13.5 seconds left in the third period as the Rebels snuck past the Kimberley Dynamiters 5-4 in a wild affair at the Complex. The game was tied 1-1 after 40 minutes, but three quick goals from Ryan Aynsley, Stuart Walton and Josh McGladery gave Castlegar a 4-1 lead, before goals from Alex Hall, Cody Boekestyn and Senate Patton tied the score at 4-4 with 1:01 remaining in the third period. Anthony DeLong also scored for the Rebels, while Hall's third-period tally was his second of the night. Alex Ross picked up his fifth win of the season between the pipes for Castlegar, while Nitros tender Tory Caldwell was tagged with the loss.

Kimberley had their fair share of chances in the first 40 minutes. Two posts, a disallowed goal, and an Alex Ross robbery of Dynamiter captain Alex Hall kept Castlegar in the game early, though the Rebels' Arthur Andrews was foiled on a second period breakaway, and McGladery hit a post of his own.

Anderson's goal was not without controversy, either. His chance came after a Ryan Aynsley rush, and the Rebel forward appeared to clip Caldwell with his stick as he passed by the net.

Up Next: A date with the Golden Rockets tomorrow afternoon (2:00 PM, Complex).

No Dice: The (unofficial) results are in on the Castlegar Recreation Complex referendum. The Castlegar News has the details here. Stay tuned to Mountain FM for plenty of reaction through the week.

Out of Town: Nelson beat Sicamous 3-1 in the only other game involving Neil Murdoch division teams, while tomorrow's opponent, Golden, lost 7-4 at Osoyoos. One other score of note saw Fernie outshoot the Columbia Valley Rockies yet lose 5-4 in Invermere.

Bits & Bites: Dylan Richardson and Brett Schafthuizen were the lone combatants on tonight's fight card, after a fracas broke out in front of the Kimberley net midway through the third period (thanks to Kim Magi from the Castlegar News for the photo). Some suspensions to pass along as a result of Friday's action. Columbia Valley's Jacob Halderman and Chris Johnson each got two games for checks to the head, while Creston Valley's Kane Dawe got a game thanks to the misconduct rule. Princeton's Devon Grossler was assessed a three-game ban for a gross misconduct.
Posted by Chris Wahl at 10:35 PM