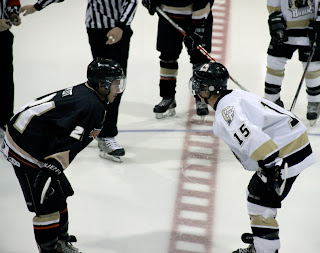 Castlegar looks to make it four straight wins tonight when they host the Grand Forks Border Bruins (7:30, Complex). Not only that, the Rebels could take sole possession of first place in the Neil Murdoch division with a victory this evening.

The team comes into tonight's game rolling, after a 9-3 rout of Beaver Valley Saturday night in Fruitvale. Newcomers Mike Wiest and Jamie Vlanich each scored, and 16 year-old forward Diego Bartlett was given a real shot in the arm with his first KIJHL 2-goal game.

Our Opponent: Grand Forks has only collected six wins on the season, but are keeping most of their games close. However, they are yet to pick up an away victory within the division, and tonight's game will surely be a test. Forward Yan Kalashnikov had a breakout month in November scoring 15 points (6-9) in 9 games. For his efforts he was named Kootenay Conference Player of the Month. Offensively, Salmon Arm's Zac Thompson leads the way with 36 points, while former Fort St. John Huskie Garrett Muir leads the goaltending contingent with a 4.34 GAA in 17 appearances. Watch for forward Cody Robertson. He's the club's penalty minute leader (136 PIM, good for 10th in the KIJHL).

In the Press Box: The Rebels are still without defenceman Darren Tarasoff (suspension). He's eligible to return Saturday night in Sicamous. Spencer Brodt returns to the lineup tonight after serving a one-game suspension (also stemming from a dust-up Friday night against Spokane). Grand Forks do not have any injuries or suspensions recorded on their roster, but forward Nick Van Damme and defenceman Garett McCracken both missed Friday's game.

Broadcast Info: We'll have the webcast, beginning at 7:30.

Why did those players change numbers?

It could be just a case of personal preference after they both became available. I'll ask tonight.