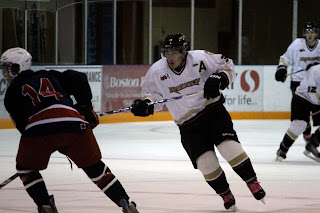 It seems like a month has passed since the last time the Rebels played a home game, and tonight's matchup against Spokane is not without its share of intrigue. Gone are Ryan Aynsley, Andrew Walton and Adam Smith. Newly-acquired Mike Wiest, Jamie Vlanich and Cole Buckley could all feasibly make their Rebels debuts this evening (7:30, Complex). The new-look Rebels were undoubtedly the busiest team on cut-down day, and I had a chance to chat to coach Steve Junker about his new goalie late yesterday afternoon.

Tonight marks a stretch of three divisional games in five days that are of the utmost importance to Castlegar. They sit 4 points back of Beaver Valley for first in the Neil Murdoch, however the Rebels do have 6 games in hand. Saturday's game in Fruitvale should be a dandy as well. For the post-Aynsley Rebels to succeed, they need to have a balanced attack from the likes of Wiest, Taylor Anderson, Anthony DeLong, Erik Wentzel and Spencer Brodt. Junker told me earlier this week Aynsley's departure to Trail forces them to rely on more than just one player for offense, and that style of play will get its first test tonight against a hard-working club from Washington state. This is the first of three December meetings between the two teams: they'll play a home-and-home December 17th and 18th as well.

Last Meeting: October 22nd in Castlegar. Anderson scored twice as the Rebels went 4/7 on the power-play in a 5-3 win.

Our Opponent: Spokane (15-14-0-1, 3rd Neil Murdoch) comes in having not played since last Friday, a 3-2 OT loss in Nelson (the winner scored by former Brave Joel Stewart). The club's player of the month for November, forward Rance Hughes leads an attack that has struggled to score at times, but with speedy forwards like Mitch Fowler and Jesse Collins in tow, this Braves club can be dangerous (they handed the Rebels one of their five losses earlier this season). Uriah Machuga also has 13 points since returning to the Braves from Trail. Newcomer Tyler Mort should make his Braves debut tonight as well.

Ridley Traded: Even though he hasn't played with the Rebels in over a month, it's worth a mention the team has sent defenceman Matt Ridley to the Osoyoos Coyotes, where he was immediately placed on reserve. Ridley had spent the last month with Westside in the BCHL.

Out of Town: It's an 8-game night in the KIJHL this evening, all other Neil Murdoch teams are in action as well. Grand Forks hosts Kimberley (7:30, Grand Forks Arena). Beaver Valley is in Nelson (7:00, NDCC Arena).

Bits & Bites: Lots of transaction news to catch up on: former Rebel Luke Richardson has been placed on reserve by the Kelowna Chiefs. He had 26 points in 25 games in Rutland. Prince George (BCHL) has reportedly signed Brandon Watson from Osoyoos, and also released former Revelstoke Grizzlies forward Riley Spraggs. A Cranbrook newspaper report says former Dynamiters captain Alex Hall could be joining the Oceanside Generals of the VIJHL, while fellow 20 year-old Brock Leavins is off to the Northwest League's Whitecourt Wolverines. Former Beaver Valley Nitehawk Kyle St. Denis is now on the active roster of the BCHL's Victoria Grizzlies.
Posted by Chris Wahl at 8:52 AM