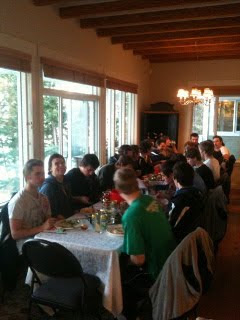 Nothing like a hearty pre-game meal after a long bus ride! This photo sent in by the Wentzels, who hosted the Rebels before Friday's game at North Okanagan. I'm sure it was a treat for some of the Okanagan players on the club (Erik Wentzel, Tyler Robinson, Ryan Reid to name a few) to play a bit closer to home in front of family and friends.

I caught up with Rebels bench boss Steve Junker yesterday to get his thoughts on the trip, as well as his take on the Castlegar contingent skating in next month's KIJHL All-Star weekend in Fernie. To hear the full interview (which will also air on Overtime tonight if you're in the Kootenay-Boundary), click here. I'll also be a guest on tonight's show with Smoke Eaters voice Jon Zacks. We'll go over the Neil Murdoch division's reps for the mid-season classic, which takes place the weekend of January 14th and 15th at the Fernie Memorial Arena.

Bits & Bites: Bruce Fuhr of the Nelson Daily has a nice piece on the crazy weekend that was in the KIJHL, to read it click here. A busier than normal Tuesday night with 4 games on tap including short-staffed Beaver Valley hosting Grand Forks. Columbia Valley, who by my count have 6 players currently suspended, are in Golden in another notable matchup.
Posted by Chris Wahl at 8:55 AM