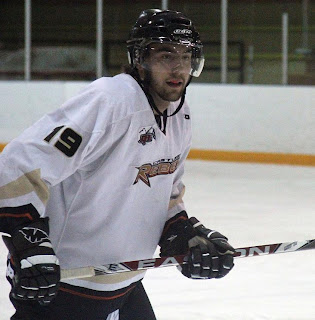 The Rebels came into the first game of their new era wanting balanced scoring. They got it. Tyler Robinson, Spencer Brodt, Erik Wentzel and Anthony DeLong each scored, and Alex Ross picked up his second shutout of the season as Castlegar picked up win number 20 on the year.

Two of the three newcomers made positive first impressions (but to be fair, Cole Buckley didn't play). Mike Wiest (pictured above) had an assist, while Jamie Vlanich created several scoring chances on a "Kid Line 2.0" with Diego Bartlett and Arthur Andrews. The Rebels were strong defensively, limiting the Braves to 10 shots through the first 40 minutes.

What remains to be seen, however, is the fallout of a mid-third-period incident that saw 4 players (the Rebels Spencer Brodt and Darren Tarasoff and Spokane's Van Stefanou and Nick Farmer) ejected for fighting. The odd part about the whole thing, which contravened the KIJHL misconduct rules, is that neither side really seemed terribly interested to fight. We'll see what the league disciplinarians have to say about the whole incident tomorrow.

Up Next: The Rebels visit the Nitehawks in Fruitvale in a battle for first place. Beaver Valley lost 6-2 in Nelson tonight.

Out of Town: Former Rebel Andrew Walton lost his debut in Fernie, 2-1 against Creston Valley. New T-Cat Brandon Formosa scored the winner, while captain Travis Ludwar made his return to the lineup. Elsewhere, Osoyoos lost in regulation for just the second time this year, 7-3 at Sicamous.

AP/BCHL Watch: Former Rebel Ryan Aynsley had an assist in Trail's 4-3 loss vs. Surrey tonight, while former Eagle David Ahl went pointless in his Quesnel Millionaires debut, a 3-1 home win over Victoria. It's decision time for Westside: former Rebel Matt Ridley played his ninth game as a Warrior AP tonight in their 2-2 tie at Vernon. Fernie's Chase Golightly AP'ed for Prince George tonight, while Osoyoos' Carter Rigby had an assist for the Penticton Vees in their 6-1 win at Merritt.
Posted by Chris Wahl at 10:47 PM