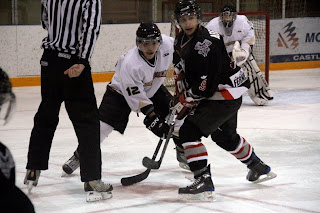 I chatted with Bartlett this morning in advance of the weekend, hear that interview here. I have tape as well from Castlegar products Scott Morisseau and Andrew Walton, who are both representing the Ghostriders in tomorrow's All-Star game. I'll post it once it airs on Mountain FM.

Not making the trip is overage defenceman Darren Tarasoff, who has a lower-body injury that has kept him out of the lineup for the last three games. He's been replaced by Nelson defenceman Riley Henderson, who is the subject of a nice write-up by Nelson Daily sportswriter Bruce Fuhr.

A reminder the webcasts for this weekend's All-Star games are both free of charge.

Summerland In: BC Hockey has given approval for the KIJHL's 20th franchise to begin play in Summerland next year. Of course, the former Sting called Summerland home for several years before moving to Penticton in 2009. As far as I know, no name has been chosen yet. The Chase Heat will also join the KIJHL for the 2011-12 season.
Posted by Chris Wahl at 10:38 AM