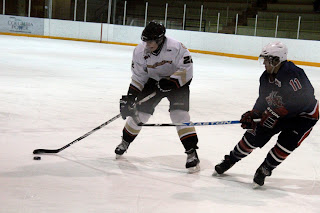 A snowy trip south this afternoon for the Rebels as they pay a visit to the Spokane Braves. Fresh off a win Tuesday over Grand Forks, Castlegar will look to open the weekend with a bang despite lacking the services of leading scorer Ryan Aynsley. The 20 year-old has been suspended for two games after receiving a checking from behind major late in Tuesday's victory.

And after a long layoff, the games will come fast and furious for Steve Junker's troops. The Rebels play 7 games in the next 12 days, 5 of which are being played within the Neil Murdoch division.

Last Meeting: Even though the last trip to Spokane may have resulted in the Rebels getting two points, it was far from the type of experience they'd like to repeat. An 8-7 win on December 18th put the Rebels into the holiday break on a winning note, but it was almost an epic collapse as, at one point the Rebels had a 7-3 lead in the contest.

Our Opponent: Spokane (18-20-1-2, 4th Neil Murdoch division) have struggled to find a consistent offensive presence this season. 19 year-old Rance Hughes, who represented the club at the All-Star game in Fernie, leads the team with 21 goals and 37 points. Forward Jeremiah Holmes made his return to the Braves lineup last week after missing 6 games with an injury incurred when he was hit by Rebels defenseman Erik Alden on December 17th. Since the last time these two clubs have met, the Braves have also parted ways with forward Tyler Mort, who had 6 points in 7 games. Head coach Mike Bay has told me repeatedly this season his club has been looking for a defenseman; they may have found their man in overager Jacob Walsh. The 20 year-old last played for the Braves in 2008-09, and had a brief stint in the NAHL with the Alexandria Blizzard that season too.

Broadcast Info: The Braves crew will have the webcast beginning at 8:00. ***UPDATE*** It is an 8:00 start despite what the KIJHL website says, I've been given confirmation from a Braves source.

In the Press Box: Castlegar, as mentioned, is without Aynsley tonight. Spencer Brodt and Curtis Pereverzoff are also questionable.

Out of Town: Only one other Neil Murdoch team is in action tonight. Nelson welcomes the Kelowna Chiefs (who of course are the Rebels next opponent tomorrow night). Former Leafs Dane Rupert and Landon Andrusiak make their return to the NDCC Arena.

Bits & Bites: Former Beaver Valley Nitehawk Kyle St. Denis will reportedly make his Victoria Grizzlies (BCHL) debut tonight. Stay tuned to Mountain FM through the afternoon for St. Denis' take. Border Bruins d-man Derek Grimm, who was hit from behind by Aynsley in Tuesday's game, did not play last night in Grand Forks' 5-3 loss at home to Nelson.
Posted by Chris Wahl at 9:03 AM