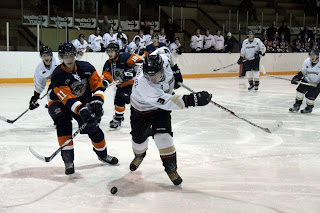 After the 4-1 win in Golden last night, the Rebels are flying high heading into a matchup with the Columbia Valley Rockies in Invermere this evening (6:30 Pacific, Eddie Mountain Arena). Like last night, it's the second of only two meetings between the clubs, and like last night, it's a season series in which Castlegar holds a 1-0 advantage. It's also the final game for Castlegar before next weekend's All-Star festivities in Fernie.

Despite facing a team this evening that has only won 8 games this year, it could be a close affair (if the meeting in Castlegar was anything to go by). Not only that, but with 4 key bodies potentially out of the lineup, the Rebels' veteran-laden squad could again be playing with a bit of a short bench against a Rockies team that isn't afraid to rough-house.

Last Meeting: A night after a disappointing loss to Kamloops, the Rebels and Rockies tangled at the Complex on November 20th. And after spotting Columbia Valley a 2-0 lead, the Rebels stormed back for a 6-3 win (a Tyler Robinson goal with 4 seconds left in the second period put the home side up for good).

Our Opponent: Rob Rice's squad (8-26-0-4, 5th Eddie Mountain division) have been decimated by injuries this season, and have struggled at times to find their offensive touch, especially after shipping veteran sniper Darrell Boldon away for the second season in a row. Stephen Hynes is the only Rockie with more than 25 points this season (by contrast the Rebels have 8), but 17 year-old rookie Tryg Strand (who skated with the MML Kootenay Ice last year) is showing promise in his first full year in junior hockey. Former Border Bruin Jake Halderman has spent the year reacquainting himself with the penalty boxes around the league. After leading the circuit in PIMs last year, he currently sits 2nd in the KIJHL with 256 (only Kimberley's Olli Dickson has more). Another former Border Bruin, goaltender Tyler Stamler, seems to be getting the bulk of the starts in goal (he played in the 5-4 OT loss in Creston last night too), but Jarvis Bender was terrific in the loss when Columbia Valley came to Castlegar earlier this year.

Broadcast Info: The Rockies' crew has the call on kijhl.ca at 6:30 Pacific time.

In the Press Box: Castlegar dressed only 15 skaters last night, as they were missing Spencer Brodt, Ryan Reid, Darren Tarasoff, Arthur Andrews and Curtis Pereverzoff to an assortment of knocks including sickness I'm told. To the best of my knowledge, no APs made the trip with the team this weekend.

Out of Town: Only one Neil Murdoch division team, Beaver Valley, has the night off. Grand Forks is in Sicamous tonight for their only date with the Eagles, while Nelson follows the Rebels' tracks into Golden. Spokane hosts Creston Valley in a game that could well be the season debut for '90 D Jacob Walsh. He skated with the Braves during the 2008-09 season. Another matchup to watch tonight sees Kamloops visit Osoyoos. The Storm doubled up Revelstoke 6-3 last night, and the Coyotes will likely be without one of their better d-men, after Matt Guerts got involved in a scrap with Kelowna's Colten DeFrias at the end of the game last night according to the summary. Former Dynamiter sniper Corey Allen made his Coyotes debut last night too.
Posted by Chris Wahl at 7:15 AM