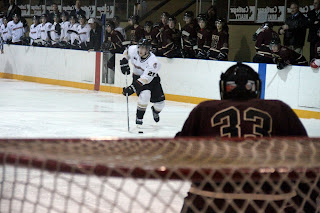 Anthony DeLong's goal 3:37 into the second period opened the scoring, and proved to be the game-winner as Castlegar shut out the Princeton Posse 4-0 on home ice. DeLong snuck a backhand shot underneath Posse goaltender Brett Patchett to break a scoreless draw, while Erik Wentzel, Stuart Walton and Spencer Brodt added markers in the final ten minutes.

Alex Ross collected his third shutout of the season, having to parry a couple of mad scrambles as well as repeated efforts by Princeton's two noticeable AP callups, Eric Schmidt and Brendan Colter.

The Rebels were denied the chance to claim the Neil Murdoch regular-season crown, though, because Beaver Valley snuck past Nelson 3-2 at the NDCC Arena and remain within striking distance of the Rebels (albeit closing a 13-point gap in 7 games is a tough test).

Injury Concerns: Both teams picked up bumps and scrapes tonight. Rebels defenseman Mike Wiest did not see the ice in the third period (or if he did, it was sparingly) after taking a hard hit while releasing a shot in the second frame. Princeton's Brett Serpico did not see any ice-time in the final 40 minutes, and his was the only bag I spied on the Princeton bus as I walked out to my car after the game.

Up Next: Castlegar wraps up the weekend against the team they're likely to face in the first round of the playoffs when they visit Spokane tomorrow (2:00 PM, Eagles Ice-A-Rena). My apologies in advance if no gameday package is provided as I understand the bus is leaving fairly early tomorrow morning.