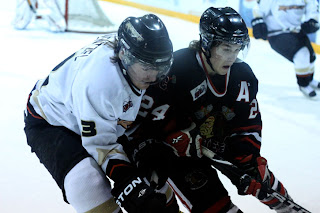 Anthony DeLong had a hat-trick, including two short-handed goals, as the Rebels dispatched a fiesty Kelowna Chiefs squad 8-3 at the Complex.

After falling behind early on a pretty goal by Kelowna's Tanner Clarkson, the Rebels stormed back with 5 power-play goals including a pair by DeLong's linemate Tyler Robinson. Taylor Anderson, Erik Wentzel and Mike Wiest also tallied for Castlegar (34-6-0-0), while Branden Redschlag and Jordan Wood replied for the Chiefs (21-19-1-2).

Cole Buckley shook off some early nerves in his first start at home since joining the Rebels to pick up his 20th victory of the season. Jordan Bytelaar, in his 75th KIJHL appearance, allowed 7 Rebel goals before losing his temper on Wentzel and being replaced by Conor Barrie.

The two teams combined for 17 power-plays in what was most certainly a chippy affair. Tyler Jones was ejected in the first period, while Kelowna's Jeremy Wiebe was surprisingly handed only a double-minor after dropping his gloves and unloading on Wentzel early in the third period.

Aside from the obvious top performers, I thought Jamie Vlanich had a strong, hard-working game again tonight. Corbin Legros also showed some early jitters but settled down in increased ice-time as the game went on. Landon Andrusiak was buzzing for Kelowna as well; the former Leaf had 2 assists.

Up Next: The Rebels will welcome back suspended Ryan Aynsley and Spencer Brodt when they visit Nelson Tuesday night. If you're not coming to the rink, join my colleague from Mountain FM/103.5 the Bridge Matt Soper and myself for the call on KIJHL pay-per-view.

Out of Town: The Leafs were beaten 2-1 in overtime by Beaver Valley tonight, with Nelsonite Ryon Sookro providing the winner. The Rebels, though, maintain their 13-point lead over the Nitehawks with 3 head-to-head matchups still remaining (two of those being at home).
Posted by Chris Wahl at 10:32 PM