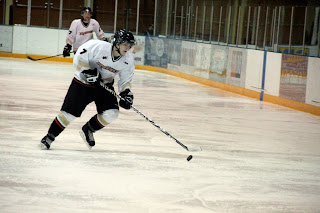 With 17 points in 9 games, forward Stuart Walton has been nominated by the Rebels for the Kootenay Conference Player of the Month for December.

"Stuart's complete game has continued into the month of December but in the absence of top scorer Ryan Aynsley, he took over a large part of the offense." -- Steve Junker

To me, Walton is a no-brainer for a "Most Improved Player" award this season. After being saddled with fourth-line duty in his rookie season last year, he's stepped up his game and assumed a much bigger role this season, and as a result, his offensive skills have started to develop. He's been dynamite in the faceoff circle recently too.

Here's a look at the other Neil Murdoch division nominees:

Audio Galore: as promised, a couple of bits from last Wednesday's win over Nelson, plus a post-game interview from Tuesday's 3-1 triumph in Grand Forks.

To hear myself and Jon Zacks chat with Jesse Knowler, click here.

For our conversation with Rebel returnee Ryan Aynsley, click here.