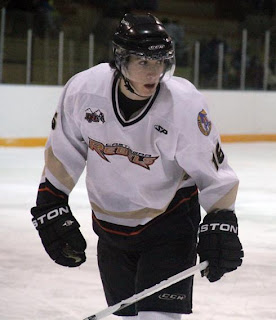 The news came out yesterday that forward Anthony DeLong is headed to Central Oklahoma (ACHA Div. 1) next season after agreeing to a verbal commitment. The local product currently sits third on the Rebels in scoring (30-19-49 in 43 games), and spent last year in the BCHL with the Williams Lake Timberwolves.

DeLong's play, to me, has taken off since Christmas (not that he was a slouch before-hand). He's scored 11 goals in 14 games since the break, including a hat-trick (of which two goals were short-handed) on January 22nd against the Kelowna Chiefs.

DeLong is the second Rebel to announce he's heading south this week, after Ryan Aynsley's verbal commitment to Northern Michigan (CCHA) was made public yesterday. Watch for audio reaction from both on this blog over the next day or two.

Congrats Anthony!
Posted by Chris Wahl at 10:33 AM