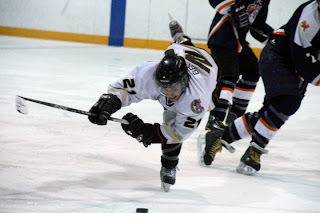 The series shifts to Fruitvale this evening for Game 3 (7:00 PM, BV Arena), and I'm sure the talk in the Rebels dressing room is about how the third-period rally that fell just short in Game 2 could be used as momentum heading into what's expected to be two tough games in the Beaver Valley.

After Game 2 I chatted with a pair of Nitehawks about the win, and what they expect out of tonight's game:

Broadcast Info: The Nitehawks crew has the call, beginning at 7:00 PM.

To me, tonight's game depends on who gets the jump out of the gate. Beaver Valley are strong in their own rink, but the Rebels have proven all season long that they can pour it on offensively. We've had two wild starts (in terms of goal-scoring) already in this series, and no doubt it will be another entertaining contest tonight.

Castlegar's penalty-kill needs a bounce-back game too. The 'Hawks went 4/7 on the power-play in Game 2, and seem to exploit Castlegar via cross-ice one-timers that get the goaltender moving (the goals by Derek Lashuk in period one and Ryon Sookro late in the second stick out to me). There won't be as much room on the smaller ice tonight, and there will also be less room to get pucks through BV's large defense (how many did they block or redirect on Saturday?) at the other end.

Linky-Link: I've added a link to the right to Osoyoos' youtube page. Their webcast play-by-play man, Tom Shields, does a great job putting together all the highlights after Coyotes' home games.
Posted by Chris Wahl at 10:43 AM