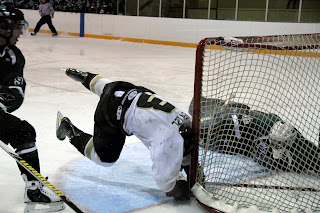 Nelson and Castlegar will try to double their fun tonight (Complex, 7:30) as they wrap up a home-and-home set and finish the 8-game season series in the process.

I didn't notice a full moon, but last night's set-to in Nelson wasn't the only game on the KIJHL schedule to feature unusual moments (more on that later). I can imagine both sides want nothing more than a quick, business-like affair tonight in order to focus on their main goal of preparing for the playoffs.

Lost in all the frustration is the fact that Castlegar's top line was outstanding. Erik Wentzel (pictured), Ryan Aynsley and Spencer Brodt combined for 8 points and were dangerous all night.

Andrea Klassen of the Nelson Star took a terrific photo of the key point of controversy last night, read it in her recap here. (Personally I think E.J. Moir's comments in the article are hilarious, but I won't plagiarize).

Our Opponent: Not much has changed between yesterday and today for the Leafs. I would expect both Joel Stewart and Dustin Johnson to have much more effective nights tonight though, they were both quiet yesterday. The Leafs have also signed Prince George product Nick Broessler to be Marcus Beesley's backup, now that Darren Hogg has been shut down for the year.

Broadcast Info: Join us for the webcast (or better yet, in person) tonight at 7:30.

In the Press Box: Mike Wiest is out. Jamie Vlanich and Tyler Jones both sat out last night's game too, stay tuned closer to puck drop to see if either draws back in.

Did You Know: A Castlegar victory tonight would secure the franchise's 2nd 40-win season since entering play in 1976 (2000-01 was the other year).

Rebels Raffle: The team will be out and about selling tickets today for the annual Castlegar Rebels raffle. There are some terrific prizes up for grabs, including $2,000 to Andre's Audiotronic and a 50" Samsung TV from the Brick. Be sure to grab some tickets at tonight's game if you haven't already, the draw takes place at next Saturday's home game against the Beaver Valley Nitehawks (and if you aren't able to make it, drop me a line and I can see what I can do about getting tickets for you).

Out of Town: Grand Forks visits Beaver Valley, and in Spokane it's "Dollar Night" tonight as the Braves host the Sicamous Eagles. $1 admission, $1 hot-dogs, etc, though I hear Sicamous fans might be able to get in for 98.6 cents Canadian.

Suspension Watch: As mentioned earlier, Friday was a wild night on many fronts, and I'd expect the KIJHL to hand down several bans after looking over the game summaries (none of last night's games were available for viewing at time of writing). I'd be guessing two former Rebels, Andrew Walton and Dylan Richardson could be facing supplementary discipline for their roles here and here, though they likely won't be lacking company on the sidelines. RiderNews summarizes the Fernie/Creston Valley shenanigans here.

***UPDATE, 7:45 AM*** Richardson's been given 2 games, nothing on Walton yet. A total of ten players already suspended from Friday incidents without Fernie/Creston Valley being taken into account.
Posted by Chris Wahl at 6:47 AM