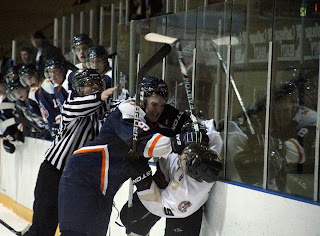 This could well be the best series of the second round, as Castlegar and Beaver Valley get set to lock horns for the first time in the playoffs since 2009. These two clubs finished 1-2 in the Neil Murdoch division, but achieved their success in two different ways.

Only two teams (Fernie and Osoyoos) outgunned Castlegar this year. The Rebels put up 242 goals during the regular season and like to use neutral zone speed to get past the defence. Counter that with Beaver Valley, who bumped, dumped and chased their way to a 32-13-1-4 record and a seven-game series win over Nelson in Round One. The two styles make for a fascinating series, and I'll wager the type of games we see in Castlegar will be quite different than what happens on the small ice in Fruitvale.

How They Got Here: The Rebels defeated the Spokane Braves in 5 games in a tough series that saw two games go to overtime. Ryan Aynsley led the way offensively for Castlegar with 6 goals and 9 points, while Alex Ross and Cole Buckley split duties in goal, picking up two wins each. Of note, 16 year-old Jesse Knowler scored both overtime winners (in Games 2 and 4).

Beaver Valley gutted out a 7-game win over the Nelson Leafs, despite winning Game 1 by the remarkable score of 13-2. The home team won every game: Nelson had trouble rushing down the small ice at the BV Arena, while the 'Hawks couldn't find the same level of consistency at the NDCC. Speaking of 16 year-olds, Dallas Calvin is BV's leading scorer heading into Round Two, with 3 goals and 11 points, while South Slocan's Ryon Sookro is close behind with 10 (5-5). Mike Vlanich played almost the entire series between the pipes.

The Season Series: Castlegar won 5 of the 8 games during the regular season, but 2 of the Nitehawks' 3 wins were at the Complex. Here's a breakdown:

Now a look at each team's leading scorers throughout those eight games:

Here's how both coaches saw the series when I caught up with them yesterday:

My Pick: Whoever comes out of this series will have bumps and bruises to be sure, but to me it comes down to style. Grant the Rebels an early lead, and you could well be watching them through the rear-view mirror, but the longer the Nitehawks are able to battle in the corners, hit, and prevent any type of speed from being established (note what both coaches say about "tempo" in the interviews), the more success they will have, and they'll have an easier time of it at home. Both teams are deep, but the Rebels have a bit more star power and to me, that gives them the edge in the series. But it will be a battle. Castlegar in 6.

Out of Town: Two of the other series start tonight, while Revelstoke already enjoys a 1-0 series lead on Kamloops.

Fernie (1st, Eddie Mountain) vs. Creston Valley (2nd, Eddie Mountain): The Ghostriders cruised past Kimberley in 4 straight, while the Thunder Cats defeated Golden in six games. Creston has played Fernie tough this year, and are one of only two teams (Castlegar being the other) to win at the Fernie Memorial Arena this season. These two clubs flat out hate each other, as evidenced by the last time they met. The war of words hasn't stopped apparently either, check out the Fernie blog for all the latest vitriol. If Creston can surmount the loss of captain Travis Ludwar (though reports indicate he could be back later in the series), they could steal a couple of games. But Fernie is getting better, and more ruthless in terms of margin of victory as the series goes on. My Pick: Fernie in 6.

Revelstoke (1st, Doug Birks) vs. Kamloops (2nd, Doug Birks): Revelstoke has been there and done that in the KIJHL and beyond. The defending Keystone Cup champs dispatched a pesky North Okanagan squad in 5 games, while the Storm did the same to Sicamous. This series will be closer than the standings suggest (Revelstoke finished 31 points up on Kamloops during the regular season), but to me, it will take a heroic effort from Lynden Stanwood in the Kamloops goal to prevent the Grizzlies from moving on. Revelstoke's three twenty year-olds are dynamic, watch for Bruce Silvera, Brooks Christensen and Brad Friedrich to carry much of the load offensively. My Pick: Revelstoke in 6.

Osoyoos (1st, Okanagan) vs. Kelowna (2nd, Okanagan): Osoyoos swept Penticton, while Kelowna needed a comeback from a 3-1 series deficit to defeat the Princeton Posse in 7. The Coyotes are built to win now, and will win this series, though they'll have to get through the playoffs' two leading scorers, Dane Rupert and Jordan Wood, to do it. My Pick: Osoyoos in 5.

Osoyoos def. Penticton in 4 (Osoyoos in 4).
Kelowna def. Princeton in 7 (Kelowna in 5).
Kamloops def. Sicamous in 5 (Kamloops in 6).
Revelstoke def. North Okanagan in 5 (Revelstoke in 4).

Enjoy Round Two everybody!
Posted by Chris Wahl at 8:58 AM