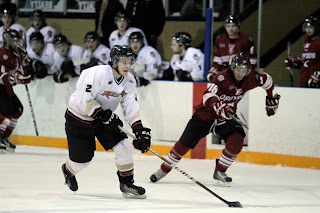 A tough way to end the season, to be sure, but the Rebels can hold their heads high knowing tonight's 7-1 loss was in no way indicative of the way this series was played.

Arthur Andrews had the lone reply for Castlegar.

In all, it was somewhat of an odd end to what had been a terrific series, but most of the 1,100+ in attendance (including a contingent of Coyotes fans) stuck around to see the KIJHL hardware awarded.

Congratulations to the Coyotes, you are a strong bunch from goaltender Kyle Laslo on out, and are worthy champions. I trust both Osoyoos and Fernie will represent the KIJHL well at next weekend's Cyclone Taylor Cup in the Elk Valley.

I'll have a more comprehensive look-back at both the series and the season as a whole next week, until then, thanks Rebels for a thoroughly entertaining season, it's been a privilege to watch this team on what has been a memorable run for everyone.
Posted by Chris Wahl at 11:58 PM

Great season Castlegar!
Your a great team also!
We were cheering for you from Fernie
See you next year.

WHAT A GREAT TEAM YOU HAVE BEEN. THE MOST EXCITING HOCKEY SEEN IN CASTLEGAR FOR YEARS. HOPE YOU ALL GO ON TO HAVE AN EVEN BETTER YEAR NEXT YEAR. HOCKEY FANS ARE PROUD OF YOU ALL.
CONGRATULATIONS ANNE H.

Hold you heads high as you all had a great season and made us fans proud of you! Best hockey that we have seen in a long time! For all of the players leaving us, good luck on the path you choose and for those of you that are coming back, we will get them next year!