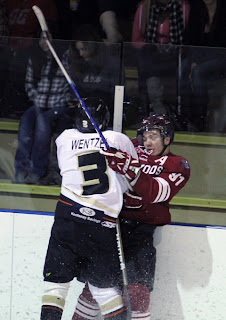 Obvious statement of the day: this one is big.

Erik Wentzel and the Rebels (photo credit: Robson Fletcher, Castlegar News/Facebook) asserted their physical selves again on home ice Tuesday and Wednesday, and are all smiles heading back to the South Okanagan for tonight's Game 5.

Wentzel's cheeky dump-in led to linemate Taylor Anderson's check on Shane Hanna in the corner late in period two of Game 4, which in turn caused a turnover that wound up behind Kyle Laslo for the 2-0 goal. Neither team has had much time and space all series long, but the Rebels were the better team at eliminating the opposition's chances on home ice, and it can be argued that the same occurred at times in Osoyoos last weekend.

What else can be said about Jesse Knowler? Two more goals (8 in these playoffs) for a guy who only turned 17 last week. Watch for his line with Ryan Aynsley and Spencer Brodt to be dangerous yet again.

Take everything said about Knowler, and wash, rinse, repeat for Hanna. The '94-born d-man is another who definitely won't be playing in the KIJHL next season, and the likes of him, Ross Mancuso, Matt Guerts and Mark Miller have been minute-munchers on the back end for Osoyoos.

Aside from flurries of action around Alex Ross, the Rebels kept a pretty clean house in their own zone. The question is though, will that carry over into what's sure to be a heated environment at the SunBowl Arena.

A third straight win would give Castlegar the opportunity to close out the KIJHL on home ice Saturday, but a Coyotes victory would mean home ice could be a trump card in the Rebels' attempt to stave off elimination.

Broadcast Info: Our friends from the Coyotes have the webcast tonight, beginning at 7:35, while Mountain FM's Jon Zacks hits the air at 7:20 PM for his pre-game show.

Minor Details: Castlegar's pee-wee reps will battle the Burnaby Winter Club for third place this morning at the Tier III provincials in Campbell River. The Rebels dropped a 6-4 semi-final decision to Elk Valley in last night's semi. Meanwhile the Kootenay Wildcats female AAA midget club opens up a best-of-three championship series today in Kelowna. Best of luck to both teams!
Posted by Chris Wahl at 7:08 AM