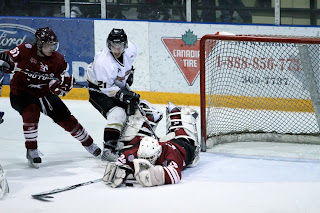 Expect another tight game tonight as the Rebels and Coyotes drop the puck on Game 4 of the KIJHL final (7:30, Complex).

It's a golden opportunity for Castlegar to even the series on home ice, in front of what's expected to be another large crowd. But to do that, the Rebels will need to maintain the physical play that's carried them through the first three games of the series, and limit the Coyotes' time and space.

The series so far has come down to bounces and timely goals, but last night's 30-17 shot advantage (including 13-2 in the opening period) was the largest disparity we've seen thus far. Osoyoos is dangerous, though, with the likes of Thierry Martine, Steve Sasyniuk and Stefan Jensen always waiting for a long pass to catch the opposing defencemen sleeping.

Fun Fact: Ryan Aynsley's game-winner was the first even-strength goal scored by the Rebels in this series.

Broadcast Info: We'll have the webcast yet again beginning at 7:30, while Randy Bedard and Tom Shields have the Coyotes' radio call on EZ Rock Osoyoos.

Post-Game Tape: Jon Zacks and I caught up with a couple of Rebels after Game 3.

For our conversation with Alex Ross, click here.
Posted by Chris Wahl at 10:33 AM