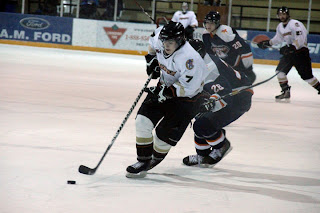 It's do or die time for Beaver Valley.

After the Rebels took 2 of 2 from the Hawks in Fruitvale Monday and Tuesday night, the series shifts back to Castlegar tonight (7:30, Complex). With a win, the Rebels can move on to Round 3 against either Fernie or Creston Valley.

Again, a relatively small gameday package, because situationally not much has changed for Castlegar since Game 4. I'd expect Alex Ross to again get the nod between the pipes tonight, but it's anybody's guess who will start for Beaver Valley, after Zach Perehudoff was named the starter for Game 4 over Mike Vlanich.

Post Game Audio: I had a couple of conversations after Game 4 in Fruitvale:

Broadcast Info: Once again, we'll have the webcast for you beginning at 7:30.

Upcoming Schedule: If Beaver Valley wins tonight, Game 6 will be tomorrow in Fruitvale at 7:30. A Game 7 would be back at the Complex Saturday night (7:30) with Round Three slated to start either Sunday or Monday.

Out of Town: The Okanagan Conference final is set. After Osoyoos eliminated Kelowna two days ago, the Revelstoke Grizzlies booked their ticket last night after taking out former Rebel Dylan Richardson's Kamloops Storm in five games.