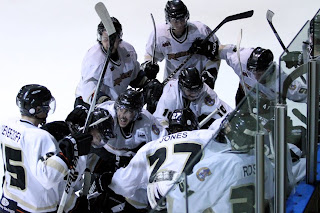 Thanks to Kim Magi from the Castlegar News for the pic.

Ryan Aynsley's under there somewhere.

The 20 year-old from Kelowna scored 1:39 into overtime to lift the Rebels back into the KIJHL final with a 2-1 victory over the Osoyoos Coyotes.

Aynsley took a centring feed from Spencer Brodt and fired a one-timer past Coyotes netminder Kyle Laslo for his team-leading fifteenth goal of the playoffs, and Castlegar's 3rd OT winner of the post-season to boot.

But just like Games 1 and 2, tonight's contest was a nail-biter.

Jesse Knowler opened the scoring 8:03 into the first period on a pretty cross-crease pass from Aynsley in a period that saw Castlegar outshoot their South Okanagan opponents 13-2.

The Coyotes waited until the 6-minute mark of the third period when Steve Sasyniuk pounced on a rebound and put it past Alex Ross.

It was a fitting reward for the line of Sasyniuk, Josh Gray and Van Bettauer, after Gray was robbed by Ross late in the second period.

Tonight's game was no less physical than the weekend tilts in Osoyoos.

Tip of the Hat: To the 786 fans who turned up tonight, it was rockin' in the Complex and a great sight to see.

Tip of the Hat, Part II: To EZ Rock's broadcast crew of Randy Bedard and Tom Shields, thanks for having me on during the second intermission. A pleasure chatting with you both!

Out of Town: The Richmond Sockeyes have booked their ticket to Fernie for the Cyclone Taylor Cup, after sweeping Abbotsford in the PIJHL final. The Sockeyes won the whole kitandcaboodle in 2009.
Posted by Chris Wahl at 11:15 PM