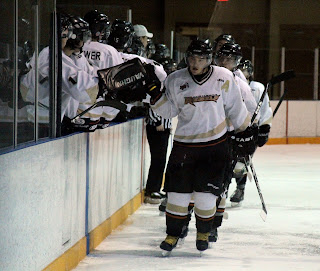 As promised, some tape from Castlegar's two newest college recruits.

Jon Zacks chatted with Erik Wentzel earlier this week on Overtime, have a listen here.

I caught up with Ryan Reid yesterday, hear what he had to say here.

Bits & Bites: Grand Forks has named Brent Batten as their new head coach and GM. Batten has history with the OHA and Pursuit of Excellence academy, and has also spent time on the staff of the SJHL's Estevan Bruins. He sounds upbeat about his new gig and is (according to the almighty Twitter) already working on next year's roster. I'm sure fans in the Boundary are intrigued as to what he'll bring to the table come the 2011-12 season. Batten is the second new head coach to be named in the KIJHL this season, joining new Rockies bench boss Marc Ward.
Posted by Chris Wahl at 10:36 AM