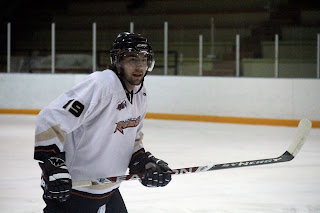 Enchant, Alberta's Mike Wiest is the latest graduating Rebel to find somewhere to play next season. He'll wear the blue and gold of the University of Lethbridge Pronghorns in 2011-12. Great news for a guy who suffered an unfortunate injury in Castlegar's playoff run last season, but remained a big part of the team from the sidelines. Castlegar certainly could have used his 63 regular-season points in their march to the league finals.

Wiest was no stranger to rinks across the KIJHL, having spent time in Beaver Valley and Fernie before being acquired by the Rebels last December in the Andrew Walton trade.

One of the things Wiest said in an interview I did with him yesterday was how nice it will be for him to play in front of family and friends after effectively spending his whole junior career away from home. To hear our conversation, click here.

Wiest becomes the fifth member of the 2010-11 Rebels to move on to college/university hockey, joining forwards Ryan Aynsley, Anthony DeLong and Erik Wentzel as well as defenseman Ryan Reid.

AGM: Castlegar will hold their Annual General Meeting Tuesday night at the Complex, at 7:00 PM. Unfortunately, my duties at the radio station will preclude me from attending, but expect at least some of the juicy details as next week progresses.

Bits & Bites: Creston Valley defenceman Skylar Pacheco has committed to the BCHL's Prince George Spruce Kings for 2011-12. The young d-man put up 17 points in his 16 year-old season in the KIJHL, and represented the Kootenay Conference in the Prospects Game in Fernie.
Posted by Chris Wahl at 3:58 PM