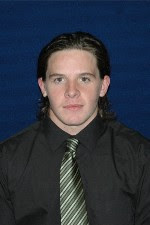 A blockbuster in the BCHL: Trail has shipped forward Travis St. Denis to the Cowichan Valley Capitals for forwards Chase Kaiser and Clayton Chessa as well as defenseman Nick Wong.

St. Denis scored 137 points during his three seasons in Trail, and already has an NCAA Div. I scholarship (Quinnipiac) in his back pocket. But according to head coach/GM Bill Birks, a change in scenery was something St. Denis asked for, and Birks seemed confident in my interview with him that he'd done well for his club by picking up three roster players rather than futures.

In Chessa, Wong, and Kaiser, the Smokies get themselves three veteran players capable of providing leadership. Wong alone has played 157 games in the BCHL with Cowichan Valley. Kaiser has played over 100 games with his hometown Caps while Chessa has also spent time with Surrey and Quesnel.

Mountain FM will have more on this deal as part of their sports coverage tomorrow, and I will post interviews with Birks, St. Denis and Wong at the earliest possible convenience.

Best of luck to Travis next season, and to Chase, Clayton and Nick, welcome to the West Kootenay.

*Author's Note: You might be wondering why a Rebels blog is discussing the Trail Smoke Eaters. Well, in short, it's because my role at Mountain FM has changed to the point where I'm able to provide a lot more of the sports content at the station, so watch for further changes to Off the Wahl as it develops more of a regional scope.
Posted by Chris Wahl at 4:38 PM