Wallace to PIJHL, Other Trade News 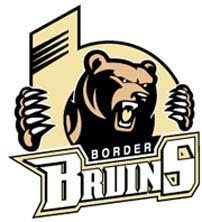 The Grand Forks Border Bruins have swung a deal with North Vancouver of the PIJHL, sending defenseman Mack Wallace westward in exchange for forward Jacob Bergeron. Wallace, a Vancouver product, put up 14 points (3-11) and 109 PIMs for the Bruins in his 16 year-old season in 2010-11, and represented the Kootenay Conference in the 2011 KIJHL Top Prospects Game in Fernie. He's also a list player of the WHL's Calgary Hitmen.

In Bergeron, the Border Bruins get a 6-3 19 year-old forward who scored 16 points (7-9) on a Squamish club (which has since moved southeast to my old stomping grounds on the North Shore) that won only six games in 2010-11. I chatted with Border Bruins head coach/GM Brent Batten this morning; he seems very excited about what the Calgary native brings to the table, stay tuned to Mountain FM/103.5 the Bridge for his thoughts, which will subsequently be posted here.

Braves Deal: Grand Forks wasn't alone in playing "let's make a deal" over the past week. Spokane sent promising '93 forward Jesse Collins to the Creston Valley Thunder Cats to complete a deal from last season that saw Dylan Solberg head to the Braves. Collins was a late cut of the NAHL's Wenatchee Wild at the start of the 2010-11 season and attended the Smoke Eaters' spring camp this past March.

And More: Golden also picked up a strong 20 year-old forward in Colten DeFrias from the Kelowna Chiefs for futures. DeFrias will be re-united with younger brother Brett with the Rockets. Fernie and Kimberley swung a three-player deal that sees forwards Mark Strachan and Stefan Burzan head to the Bavarian City in exchange for forward Daniel Higgs, whom the Dynamiters had recently acquired from PIJHL Mission. RiderNews has all the deets on that deal. Former Smoke Eater Travis St. Denis is on the move again as well, he was traded from BCHL Cowichan Valley to BCHL Penticton in a three-team deal July 1st that saw another former Smokie, Mike Betz, head to Ontario.
Posted by Chris Wahl at 11:27 AM

Nitros starting the hockey season off with 4 big signings. The Nitros have signed Jared Marchi (Kimberley), Jeremy Mousseau (Kimberley), Taylor McDowell (Cranbrook) and Isaac Schacher (Kimberley). Prasad said the team is excited about adding this local talent. This is a start in the right direction. It will make a big impact on the team having local kids that can play at a high level.

Mousseau in particular was outstanding when Castlegar played in Kimberley last year.