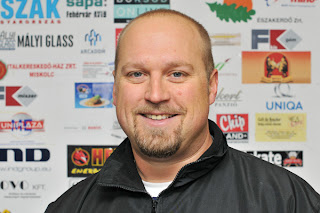 The Smokies have announced today that Bob Dever has been hired as the team's new assistant coach. Dever is a former assistant with Merritt and Vernon in the BCHL, and a former head coach of Creston in the KIJHL. He'd spent the past three years in Hungary coaching at both the under-18 and professional ranks.

The Smokies website has this story on the hiring, and Mountain FM will have head coach Bill Birks' thoughts on the move through the afternoon today.

Interesting to note as well the presence of another Merritt connection. Birks and Dever played together with the Centennials for one season, and both men were assistant coaches at one time with the club (Birks under Al Glendinning, Dever under Mike Vandekamp). Merritt blogger Brian Wiebe had this chat with Dever last summer in advance of the 2010-11 season. His club, Miskolci Jegesmedvek JSE, reached the semi-finals of the Hungarian MOL league last year.

Bits & Bites: The Smokies have added Brad Rand, Joe Quewezance and Howie Finch to their scouting staff. Forward Ryan Luiten has joined the AJHL's Brooks Bandits. He scored 8-9-17 in 48 games split between Trail and Surrey during the 2010-11 season. The Castlegar Rebels are also expected to announce a new assistant coach this week. Without revealing too much I'm told the candidate in question is a former Neil Murdoch division head coach. KIJHL affiliates Craig Martin, Jake Lucchini, Scott Davidson (Beaver Valley), Darren Medeiros, Quinn Klimchuk (Castlegar) and Jeremy McGregor (Grand Forks) are part of 12 new commitments to the BC Major Midget League's Kootenay Ice. The club held their training camp in Nelson last weekend.
Posted by Chris Wahl at 10:46 AM

Hey Chris, Bob was also an assistant with Al for one season.