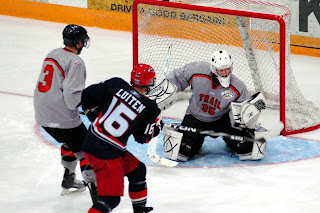 Former Smoke Eater Ryan Luiten scored one of the four Brooks second-period power-play goals as the Bandits defeated the Trail Smoke Eaters 5-0 in pre-season tournament play tonight at the Cominco Arena. The 19 year-old Alaskan skated from his own blue line to the Trail goal line before putting the puck past Smokies goaltender Matt Larose to give the Alberta visitors (at that juncture) a 2-0 lead.

Brooks opened the scoring 2:01 into the first period after Cam Maclise found himself alone on the near side with a wide open net. Both teams traded chances, including a hit post each until Trail's Josh Roberts was assessed a five-minute major and a game misconduct for charging Bandits goaltender Jan Obernesser 8:33 into the middle frame.

Luiten's goal was one of four the Bandits scored during the major power-play, as Maclise, Dakota Mason, David Watt and Anthony Petruzzelli added tallies in quick succession.

Despite the scoreline, I thought Trail played relatively well outside of the five-minute penalty (which to give Brooks credit, also included 1:18 of four-on-four play). Up front, Clayton Chessa hit everything in his path as did Daniel DelBianco on the back end. Trail was not short of chances either, going 0/9 on the power-play, though Obernesser was strong, if not flashy in the Brooks goal.

Up Next: The Smokies get right back to work tomorrow against the three-time defending Coastal Conference champion Powell River Kings, who snuck past the Wenatchee Wild 6-5 in overtime in the tournament opener that can be aptly described as a see-saw battle.

Out of Town: The KIJHL pre-season began tonight as well, with North Vancouver doubling the Grand Forks Border Bruins 4-2 in the Boundary. I chatted with Beaver Valley coach Terry Jones at the rink tonight about his club's camp and the tournament taking place this weekend in Fruitvale involving the Border Bruins and Nelson Leafs. Watch for that as part of tomorrow's pre-game package. The major midget Kootenay Ice also opened their exhibition schedule with a 5-2 win in Chase against the Thompson Blazers.
Posted by Chris Wahl at 10:23 PM