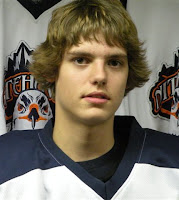 Jon Keen, the radio voice of the WHL's Kamloops Blazers, is reporting on his blog that local forward Dallas Calvin has been re-assigned by the Blazers to the Smoke Eaters.

Calvin spent last season with Beaver Valley in the KIJHL, where he put up 40 points (17-23) in 40 games as a 16 year-old, and was a thorn in the side of opposing defensemen (and goaltenders) during the season and in the playoffs against Nelson and Castlegar. Calvin also spent time with the Smokies as an AP.

I haven't yet had time to chat with anyone from the Smoke Eaters, but watch for that soon if in fact Dallas is coming back to play in Trail this season.
Posted by Chris Wahl at 10:14 PM