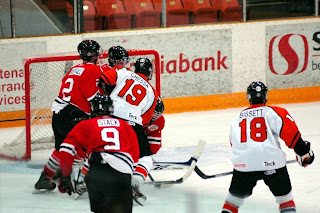 The Smokies take their first regular-season trip aboard the Trail Blazer today as they conclude a home-and-home set with the Merritt Centennials. The two sides played to a 3-3 draw Wednesday at the Cominco Arena in a game that saw the Smoke Eaters pick up point number one on the season.

For me, the two sides matched up pretty well Wednesday, the only period I would have handed Trail a definite advantage was in overtime. Both Tyler Steel and Reed Vogt were forced into making some point-blank saves in what I thought was Trail's best performance of the young regular season thus far. It'll be interesting to see just how the teams adjust to playing in a different setting, and how much of a factor (if at all) nerves might be as tonight is the Centennials' home-opener.

In the Press Box: Trail will be without forwards Kyle Horsman and Adam Wheeldon for the weekend and possibly beyond. Horsman is listed as being out 4-6 weeks while Wheeldon was a late scratch Wednesday.

Broadcast Info: I am not making the trip to Merritt this evening, but Cents play-by-play man Alex Grebenyuk will have all the action live on Q101 in the Merritt area, and online here. I will have tomorrow's game in Penticton on the new Smoke Eaters Ustream channel, links will be provided once I wrap up some finishing touches and conduct a couple tests.

KIJHL Tonight: Lots of local action on the junior "B" front this evening. In Fruitvale, the high-flying Nitehawks take on the defending league champion Osoyoos Coyotes (7:30, BV Arena). I caught up with Beaver Valley head coach Terry Jones yesterday, to listen to that conversation click here. Castlegar hosts the Kimberley Dynamiters (7:30, Complex), while the Nelson Leafs begin a stretch of three home games in three nights against Grand Forks (7:00, NDCC).

But Still: The Selkirk Saints open up their 2011-12 BCIHL campaign tonight in Kelowna against Okanagan College (8:45 PM, Kelowna Memorial Arena).
Posted by Chris Wahl at 9:34 AM