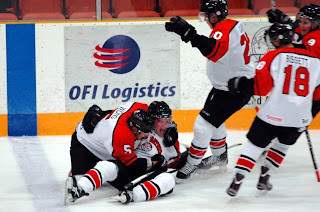 The Trail Smoke Eaters will be looking for redemption in the back end of this weekend's double-dip against the Westside Warriors. The Warriors skated away with a 7-3 victory last night thanks to a hat-trick from Tyler Krause, while 17 year-old rookie Seb Lloyd added three points including a second-period deflection that stood up as the eventual game-winner.

With the first-game jitters now out of the Smokies' collective system, I'd expect a much closer, more complete game this evening. Trail did well last night to attempt a third-period comeback after trailing 5-1 through 40 minutes, but a pair of mid-period penalties and an ensuing Krause power-play goal swung the momentum back in the visitors' favour. As coach Bill Birks told me earlier this week, much of this year's team is still learning about life at the BCHL level, but as anyone who was at the Cominco Arena last night (or watching online) can attest, the talent is clearly there.

Our Opponent: With Krause having scored three goals last night, he's an identifiable target for defensive pressure to be sure. The Warriors' Jon Zacks spoke with the hat-trick hero as part of his post-game package last night. The line of Richard Vanderhoek, Connor Dempsey and Dru Morrison showed plenty of pace (highlighted by Morrison's second-period goal on a partial break), but Vanderhoek, the 71-point man with Surrey last year, was held off the scoresheet despite having plenty of puck possession. Izaak Berglund and Peter MacIntosh logged a ton of minutes on the back end last night (as did Colorado College-bound Michael King); all three are more than willing to jump into the play as evidenced by a late third-period chance for Westside when the captain Berglund was the lead forechecker. Rookies Lloyd, Tyson Witala and Brennan Clark all impressed last night too.

Broadcast Info: Your audio/video links will be available here tonight from both a Trail and a Westside perspective. Our pre-game coverage will usually start 5 minutes prior to the opening faceoff, though that could well be expanded as the season goes on and the broadcast becomes more refined.

Out of Town: All 16 BCHL teams are in action tonight, notably in Chilliwack where the Chiefs make their return to the league against Penticton.

But Still: The Kootenay Ice major midgets get going for real this weekend. The Ice are in Nanaimo to face the North Island Silvertips this afternoon (5:15, Nanaimo Ice Centre), and again tomorrow morning at 9:00. Closer to home, the Selkirk College Saints take on BCIHL newcomers Eastern Washington this afternoon in a pre-season affair (4:15, Castlegar Complex).

You-Tubular: I've received a couple of phone calls, emails etc. from parents and fans alike wondering if video highlights will be a fixture of my Smokies coverage this season. Short answer: yes. I am well aware of the effort put in by several other BCHL broadcasters in this regard (Eddie Gregory in Coquitlam comes to mind instantly) and that longtime Smokies play-by-play man Shawn Mullin put together fantastic highlight packages during his time here. I can't promise anything will be cobbled together with lightning speed, but when highlights, features etc. are available, they will be posted here first.
Posted by Chris Wahl at 10:06 AM

Hey Chris! Do you think the home audio will be working tonight on the bchl site? Because it was down the entire time last night.

Strange, I spoke to at least one person who said they were able to listen in (they didn't buy the PPV just listened to the audio) and said it worked, though it was a bit of a job to find the link. I'll check with our tech guru when I get to the rink this evening.

Hm well maybe I was in the wrong place then. I just clicked on the home audio link on the scoreboard. It just brought me to the bladetape commercial.

Sorry about that.. I know we didn't go to air until about 7:25 last night for the player intros. I'll definitely look into it.

Thank you so much Chris. Here's hoping to better luck all around tonight.