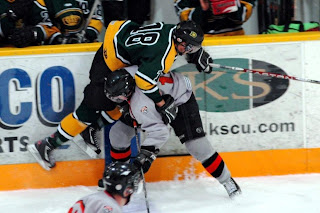 Carter Shinkaruk scored a pair of second-period special teams goals as the Powell River Kings defeated the Trail Smoke Eaters 6-0 in exhibition play at the Cominco Arena tonight. The 20 year-old winger converted a pretty 2-on-1 pass from Teagan Waugh 5:11 into the middle frame, then scored an unassisted, short-handed tally 3:37 later.

Waugh also set up a short-handed goal by linemate Brenden Forbes in the second, which was sandwiched between the two goals by Shinkaruk.

Defenseman Jordan Benton opened the scoring for the Kings 6:20 into the first period.

Former Golden Rocket tough guy Tanner Cochrane put away an early third-period marker, and 16 year-old James Neil deflected home a Taylor Carmola point shot midway through the third to round out the scoring.

Sean Maguire made 27 saves to collect the shutout in goal for Powell River, while Reed Vogt stopped 24 of 30 shots in goal for Trail.

A tough night to be sure for the Smokies, who were shut out for the second straight game. But there were some positives. This team will hit anything that moves; the likes of Clayton Chessa, Clayton McEwan and Adam Wheeldon were throwing hits all game long. Trail, despite putting 27 shots on goal, attempted many more that were either blocked or deflected out of play by a smart, organized Kings defence. Erik Cooper again worked hard at both ends of the ice, while Wheeldon was robbed by Maguire late in the game as Trail pushed to break the Powell River netminder's shutout.

It's also well worth pointing out the fact that Trail had eleven players (including Vogt in goal) in tonight's lineup who have never played a BCHL regular-season game. Even though there may well be "irons in the fire" with regards to bringing in more scoring depth (as head coach Bill Birks pointed out last weekend), that fact alone indicates it's hardly time to over-react now with just two games elapsed in the pre-season.

Up Next: The Smokies will try to end their pre-season tournament on a positive tomorrow afternoon against the NAHL's Wenatchee Wild (who defeated Brooks 6-4 in today's matinee at Cominco Arena). Faceoff is at 1:30, while the Kings and Bandits start their tourney finale at 10:30.