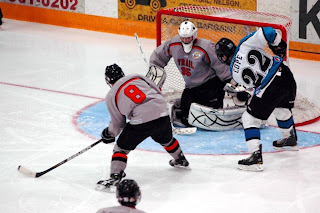 Smokies goaltender Matt Larose stops Wenatchee forward Matt Cope in close as defenseman Brandon Egli looks on (Randy Emery photo)
Trail's starting goaltender, Matt Larose, has been named to Team Canada West's evaluation camp roster for the 2011 World Junior "A" Challenge, being held in Langley this upcoming November. The Nanaimo native is entering his second season with the Smokies after joining the club from the KIJHL's Nelson Leafs, and posted an 8-5 record, a 2.67 GAA and .924 save percentage in 15 games while backing up graduated netminder Kiefer Smiley.

Larose will be joined at next week's camp in Canmore, Alberta by four other players with a Kootenay connection. Former Smokie Travis St. Denis, who represented Canada West at last year's event in Penticton and now plays for the Vees, will get a second crack at a gold medal, while Castlegar products Ryan Renz and Aaron Hadley, who both play for the Vernon Vipers, have been invited as well. Former Nelson Leaf Gus Correale, who skates with the AJHL's Grande Prairie Storm, has also received an invite.

The camp begins September 12th with the challenge itself running November 7th through 11th at the Langley Events Centre.