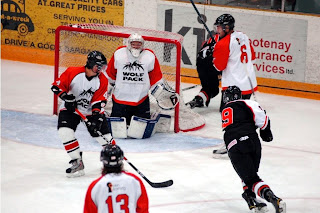 I also spoke with a pair of Nelson Leafs after their 3-0 victory Friday night at Castlegar.

Forward Patrick Martens scored twice in the victory, hear his take on Game One here.

Kolby's Fund: The official fundraising tally from Saturday night's game should be available later today or tomorrow. Stay tuned to the blog and the Smokies website for more details.

Bits & Bites: Smokies season-ticket holders can pick up their packages starting today at Re/Max in Trail. The home opener is Friday against Westside (7:30, Cominco Arena). Congrats to 19 year-old Erik Alden on being named Castlegar Rebels captain. He'll do well in his new role I'm sure. How about the weekend numbers put up by 16 year-old Craig Martin for the Nitehawks? 2 games played, 2 goals, 9 points (yes it's early days yet but Beaver Valley players are 1-2-3 in the KIJHL in scoring after opening weekend).
Posted by Chris Wahl at 12:45 PM