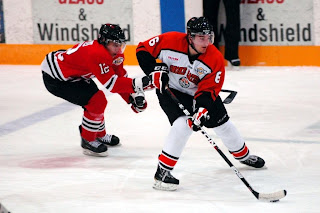 New Smokies d-man Tim Coish and I had a chat post-game, for that interview click here.

I also talked to forward Clayton Chessa, who opened the scoring in the first period. To hear that conversation, click here.

I caught up with Cents assistant coach Joe Martin before the game, to listen click here.

Bits & Bites: The BCIHL college hockey season kicks off tomorrow with Selkirk College visiting Okanagan College in Kelowna. The Coyotes boast some new faces that have a West Kootenay connection, including two Trail products, Layne Stopanski and Kris Davis. They are both former Nitehawks of course. Former Castlegar Rebel Corey Bulach also features for Okanagan, while defenseman Branden Redschlag, whose rights were acquired by Nelson over the summer, is also listed on OC's roster.
Posted by Chris Wahl at 11:32 AM