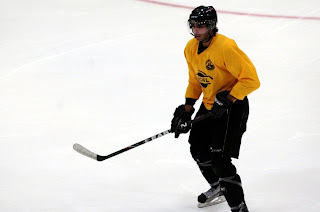 Smokies defenceman Rajan Sidhu during the club's training camp in August (Randy Emery photo)
Smokies blueliner Rajan Sidhu is off to RIT next fall, as per the previous post this morning. I caught up with the Surrey product on Friday night during Trail's pre-season game against Powell River. To take a listen to Sidhu's thoughts on college, the season ahead and even a foray into social media, click here.
I also chatted with Trail assistant coach Bob Dever following the Saturday loss to the Wenatchee Wild. To hear his thoughts on the exhibition tournament, click here.

KIJHL Pre-Season: Two fixtures on local ice tonight see the Castlegar Rebels host the Nelson Leafs (7:30, Complex) while Beaver Valley entertains Creston Valley (7:00, Beaver Valley Arena). I took in Rebels practice early this morning and chatted with returning forward Arthur Andrews afterwards. To hear that chat, click here.
Bits & Bites: Former Smoke Eater Mike Betz has been suspended by Salmon Arm for failure to report, as per the club roster page. He had been trying out with the WHL's Vancouver Giants. Betz played for Trail during the 2009-10 season. Speaking of the Silverbacks, new play-by-play voice Scott Campbell tells me he intends to call Friday's exhibition game at the Sunwave Centre against Trail. I will be travelling to the Lower Mainland while the game is being played but all the necessary links will be included in Friday's gameday package here on the blog.
Posted by Chris Wahl at 3:27 PM