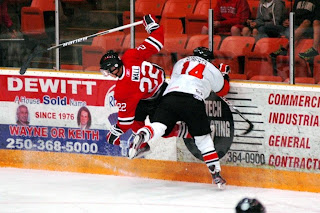 Brears converted a centring feed from Jakob Reichert over the shoulder of Smokies goaltender Reed Vogt (who by the way was making his BCHL debut) to complete Merritt's second comeback of the night.

Trail jumped out in front 2-0 thanks to similarly placed goals from Clayton Chessa and Chris Romanchuk (the latter's thanks to a pretty cross-ice feed from Erik Cooper), before Merritt's Brent Fletcher waffled a backhander past Vogt to cut the lead in half 12 minutes into the opening frame.

The Cents could well have evened things up minutes later, but a puck that wound up bouncing off the end glass, the top of the net, forward Sean Maktaak and behind Vogt was waved off immediately.

Merritt would tie the game in the second period, though, thanks to an individual effort from Silvan Harper to work out of the corner and tuck in a low shot.

Trail would regain their advantage later in the frame. A J.J. Beitel slapper was tipped home by Adam Boytinck, giving the home side a 3-2 advantage heading into the third, and setting the stage for Brears' winner.

Trail held the edge in overtime, though, particularly in 3-on-3, outshooting the Cents 8-4 in the second half of extra time and spending much of the period in Merritt's zone. Steel stood tall though to prevent Trail from getting an extra point.

Did You See: Only hours after arriving in Trail this afternoon, newcomer Tim Coish played plenty of minutes on Trail's back end, including during the 3-on-3 session. I chatted with him after the game, that and more audio will be up soon.

Up Next: The Smokies and Centennials renew hostilities Friday night (7:30 PM, Nicola Valley Arena). A programming note: I won't be making the trip to Merritt Friday, but will meet the team for the game in Penticton Saturday.

Video Update: Thanks to Darryl the Smokies tech guru, I have figured out how to get the game tape onto a flash drive after every home game. Watch for highlights from opening weekend and tonight fairly soon.