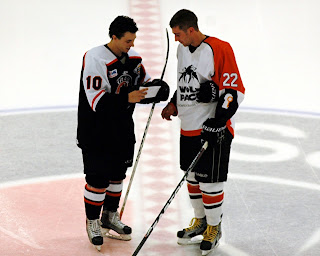 Travis Herlein, Andrew Fisher and Cody Lockwood all scored third-period goals for the Kamloops visitors, who were outshot 38-22 on the night.

Reed Vogt and Mike Vlanich split goaltending duties for Trail, though the latter was credited with all three goals against. Shane Mainprize absorbed the loss for the WolfPack.

Four of Trail's goals came in the first period, including Calvin's first marker just 1:19 in. Trail saved the rest of their offense for the final frame, and also converted on 2 of 6 power-plays while the WolfPack went 1/4.

To me, the offensive outburst represented a marked departure from what we saw during the Labour Day pre-season tournament, though the fact the Smokies are down to their mandated 19 skaters is also a bonus as players are more comfortable with one another (I posed that question to defenseman Nick Wong after the game, that and other audio will be posted once I touch it up in the office tomorrow or Monday). Young players like Baltus and Adam Wheeldon are settling in to life in junior "A," and it's easy to tell the club has more structure after a busy end of August/beginning of September. Admittedly, I chatted with former Smokie Curtis Tonello after the game; he told me tonight's matchup was only the eighth ice-time for the WolfPack thus far this year.

Do It For Kolby: I'm told the unofficial attendance was north of 1,000 tonight, which is a great showing for an exhibition game. The rink was rocking, and the funds raised for Kolby Zanier will be in the thousands (I should have an official count by early next week). Big thanks to the WolfPack for making the trip, and in a very classy move Tonello presented an envelope to the Smokies at centre ice before the game full of cash the players had scrounged together on the bus trip down from Kamloops. Smokies public address announcer Tiger Milburn and his off-ice officiating crew won tonight's 50/50 and immediately decided to add it to the fund. The Smokies family is extremely grateful for all of the support, not just from fans who attended tonight's game but I understand donations have been submitted both at the TD Canada Trust branch in Trail and at Re/Max. Great to see!

Up Next: The regular season. Westside comes to Trail for a two-pack of games beginning Friday night at 7:30. I speak for many when I say I can't wait for there to be points on the line.

Out Of Town: Aaron Brewer scored the winner in the third period as Castlegar doubled up the Nelson Leafs 6-3. 4 of the Rebels' 6 goals came on the power-play. Ryan Edwards had a hat-trick for Beaver Valley in their 6-2 home victory over Grand Forks.
Posted by Chris Wahl at 1:03 AM