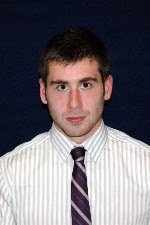 Former Smokies defenceman Curtis Tonello has committed to the BCIHL's Thompson Rivers University Wolf Pack for the upcoming season. Tonello, who played out his junior eligibility last season, took part in 82 games with Trail over two seasons, scoring 25 points (2-23) and adding 49 penalty minutes. The Vancouver product also spent a season and a half with Alberni Valley.

The university was kind enough to put together this release.

Tonello and the Wolf Pack will be in Trail September 17th for a special exhibition game against the Smokies at Cominco Arena. Final details are being sorted out but we will have much more information next week.