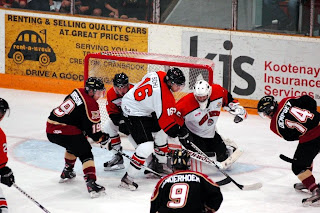 Connor Dempsey scored twice as the Warriors again used the second period to their advantage in a 5-1 victory over Trail tonight at Cominco Arena.

The Massachusetts product scored his first goal as a Warrior 5:40 into the second period to break a 1-1 tie, then added a second, coolly-placed power-play marker minutes later to increase the Warriors lead.

Trail opened the scoring tonight courtesy of 16 year-old local product Luke Bertolucci, who lifted a rebound over a prone Steve Racine four minutes into the game on a power-play.

The Smokies enjoyed the one-goal advantage until former Nelson Leaf Brayden Sherbinin equalized 3:20 into the middle frame, setting the stage for Dempsey.

Travis Blanleil put home a backhand while on a breakaway later in the second period; Westside rounded out their offensive tally midway through the third on a well-placed Tyson Witala wrister.

Once again, it was the Warriors' powerplay execution that played a pivotal role in tonight's final score. Westside went 2/3 with the man-advantage tonight after going 3/5 Friday. The Smokies I thought played a terrific first 20 minutes, outshooting their opponents 11-9 and carrying the play at times, but the two Dempsey tallies deflated everyone in the building save the very visible Warriors supporters who made the trip to the West Kootenay for the weekend.

My Three Stars: Dempsey is an obvious selection, his goals proved not only to be game-winners, but momentum-changers. He was dangerous all night. I gave the second star to Warriors goaltender Racine, who stopped 27 of 28 Smokies shots and had no chance on the one that slipped by him. Richard Vanderhoek didn't find the scoresheet, but was dangerous all night and hit the post in the second period.

Did You See: Warriors forward Tyler Krause blocked a Brandon Egli point shot with his hand during a third-period Trail power-play. The overager, who scored a hat-trick Friday, gutted it out and finished the game.

Up Next: The Smokies wrap up their three-game homestand Wednesday night against the Merritt Centennials (7:30, Cominco Arena). It's also the start of a home-and-home series against Merritt that will see Trail visit the Nicola Valley Arena Friday.

KIJHL Tonight: The Kelowna Chiefs snuck past Beaver Valley 6-5 tonight, scoring the winner with 11 seconds left on the clock to improve to 2-0 on their swing through the Neil Murdoch division. I'll have the call for the Chiefs and Castlegar Rebels tomorrow afternoon on KIJHL pay-per-view. Nelson scored three times in the first period en route to a 4-2 doubling of the Spokane Braves.

But Still: The major midget Kootenay Ice opened up their 2011-12 campaign with a 3-1 loss in Nanaimo against the North Island Silvertips. The two sides will go at it again tomorrow morning at 9:00 at the Nanaimo Ice Centre. Selkirk College dropped a pre-season tilt against Eastern Washington by a 10-3 score this afternoon in Castlegar.
Posted by Chris Wahl at 11:43 PM